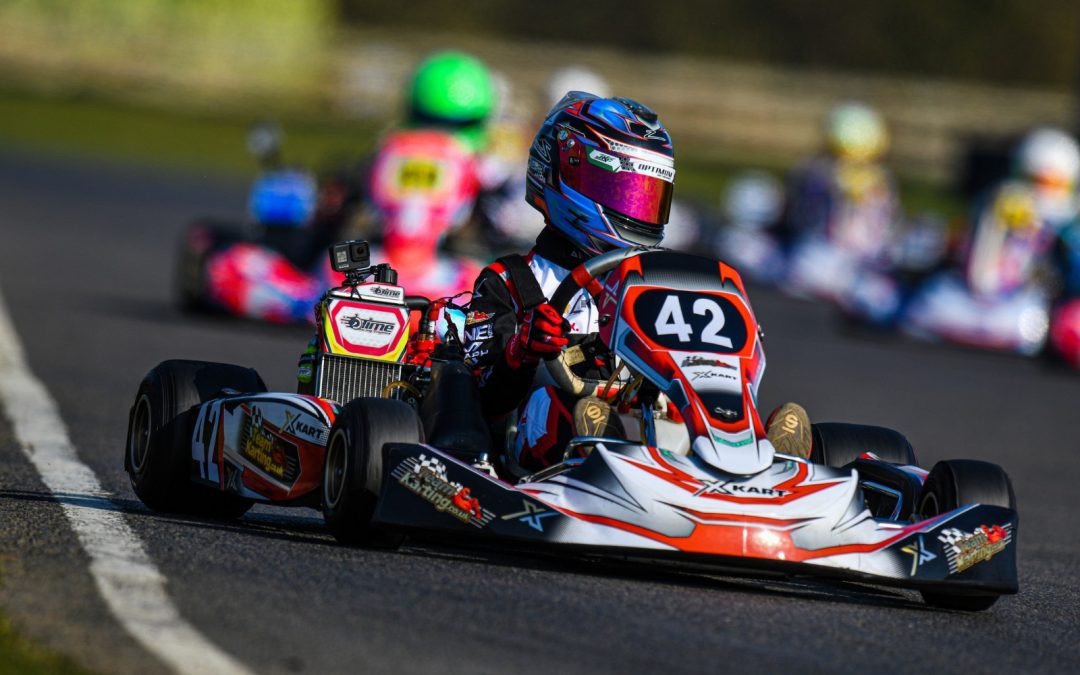 Going into this weekend I was hoping to beat the last round’s result of 22nd place of 42 drivers. The racing format would be the same as rounds 1 and 2 so for an explanation go to ‘WMKC – Round 1 – My first MSUK race!’ or click here. I would be in heats 2, 3, and 4 from 4. It was really sunny on Friday and Saturday but it cooled off a bit on Sunday.

On Friday there was only a few mini max and junior max driver so the two classes were combined and we got 6, 20-minute sessions in the day. Other than the first session, we were only going to use half of the allocated time as the races were only 10 minutes so there was no reason to set the kart up for a 20-minute practice. In the first session, I was instantly down to high 48’s, which showed how fast the track was knowing that I am usually awful at the start of a weekend. By the end of the day, I got my best down to a 47.7 but we finished a session early because my neck felt like it was about to fall off.

In heat 1, I was starting 27th of 29 for my back of (novice) grid start. By the end of the third lap, I was already in 18th after a few spinners at Christmas corner and on the formation lap. On the second lap, a driver spun at turn 4 and I overtook someone into Chapman which promoted me up to 16th place. On the following lap, another driver was able to send it up the inside of Christmas corner after I got a bad exit of crook. I stayed in p17 until the end of the race but finished 8 tenths behind the next kart after not having to pace to keep up with them. There were 4 5-second penalties after the race but none of them affected my position.

Once again, I was starting 27th of 28 for my middle of (novice) grid start. On the first lap, I got up into 21st after sending it around the outside of Christmas corner on a bunch of drivers. I knew this would be dangerous if someone else spun but I was willing to take the risk. On the following lap, I held position but on lap 3 I gained 2 places after two drivers ahead collided and fell down the last and second to last.

On lap 5, the driver ahead of me made a mistake in turn 7, giving me the opportunity to send it up the inside of turn 8 and to get passed. Not much happened until the final lap, where one of the race leaders got half spun onto the grass, which put me up into p17 once again. After penalties in front, I was classified in p15.

Somehow I was starting 27th again for my front of (novice) grid start. During the opening lap, I went around the outside of Christmas corner again which got me up to 19th. Later, the driver 2 places ahead of me got overtaken into Chapman and squeezed out which allowed me to get up into 18th. On lap 3, a driver ahead of me spun onto the grass and came back on one place behind me. By the end of the lap, I was in 17th place. The following lap came with an overtake into Christmas corner where I sent it up the inside and easily got to the apex first.

Nothing happened until lap 6 until the driver in 12 got spun and fell down to 20th. I was now up in 15th. On lap 7, there was a big pack of karts in front of me. Into turn 7, someone went for an overtake, slowing them down and causing me to ram into the back of them. This spun them and game me a 5-second drop-down penalty. On lap 9, the driver that spun onto the grass earlier had caught back up and overtook me into Christmas corner. On track, I finished the race in 15th but after penalties, I was classified in 18th.

For the final, I was starting 26th with 55 points. In turn 1 on the first lap, someone got spun which gained me a few places. At Christmas corner, a driver ahead ran wide which gained me another place. By the end of the lap, I was up in p17. During the next lap, a quicker drive that I had overtaken at the start re-overtook me and put me down to 18th. I stayed in 18th with a lot of defending until lap 7 when I left the door open at turn 3 and they got by. At the final corner of lap 11 two drivers collided. I was now back into p17. At the start of the next lap, I got a good run out of turn 2 and pulled alongside for the next corner. Just later, at Ashby, I dove to the inside of the driver ahead gaining me yet another place. 4 places in 2 laps. However, on the next lap, I got re-overtaken into Christmas corner. There was only one lap left and I couldn’t get passed so on track I finished 15th.

This was my best result before penalties (by 7 places). During the race, I had beaten my personal best by a huge 7 tenths! On the way home I was looking at the results and it turned out that after penalties I had finished in 12th place! I was really happy with this result as I had beaten my PB finishing position by 10 places.