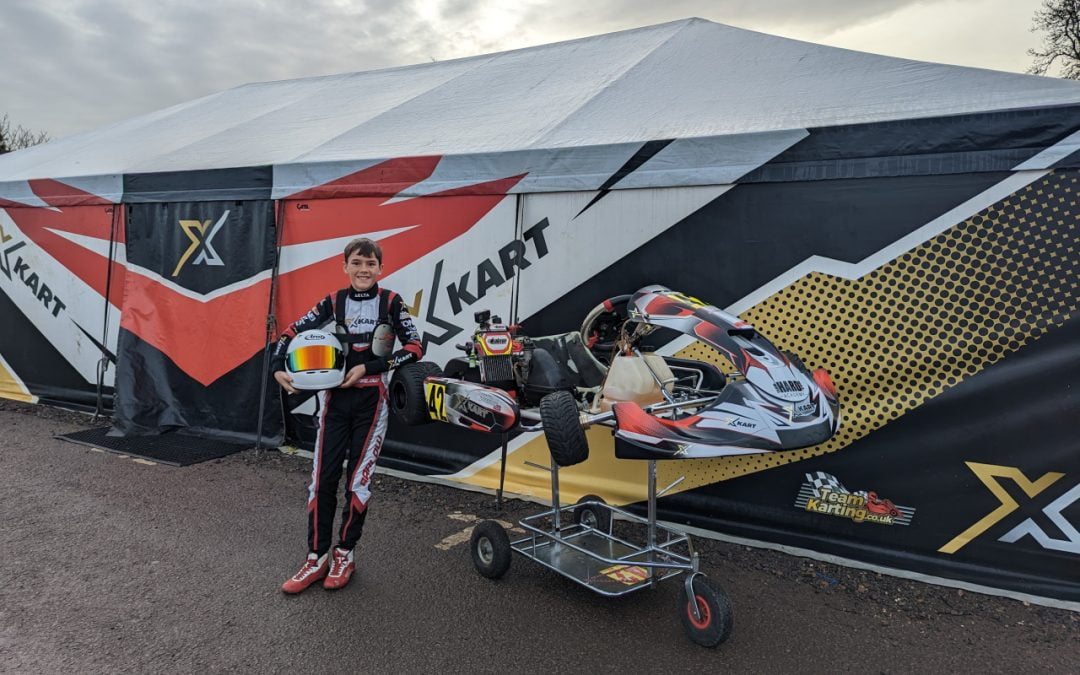 Going into this weekend I had been out of my kart for nearly 2 months so it was important that I got back up to pace as quickly as possible. The last time I drove I was driving an InterMAX so I needed to make sure I didn’t drive my MiniMAX like I drove the InterMAX a few weeks prior to this race weekend.

On Friday I was getting back into driving after a long break. At the start of the day it was wet and we were on Mojo wets, so I was about 1.5 seconds off the pace. When it dried out and when we went onto slicks. These slicks were quite worn and had been sat for a number of months so I was struggling with pace. At the end of the day I was about 2 tenths off most of the usual front runners but 5 tenths off the championship leader.

First practice on Saturday was wet and once again I was on still on my Mojo wets which are about 1.5 to 2 seconds slower than Komet wets, which many driver were now on. Due to this I was down in p12.

On second practice the track had completely dried out so we were all on slick tyres. I finished the session in p7 and was just over 1 second of the leaders pace.

I was starting in p5 for the first heat so was aiming to finish top 5. I had a difficult start where I dropped down to p7. Up until lap 6, I was slowly catching the driver in 6th until they made a mistake in turn 2. This gave them a bad exit which allowed me to send it up the inside and move up into p6. On the next lap a driver that followed me through on my last overtake overtook me into Ashby. Over the next few laps the driver ahead and I were catching the driver in 5th. On the final lap we were both within overtaking distance. After not being able to overtake either driver I crossed the line in 7th. After penalties I was classified in p6.

I started the second heat in p8 and wanted to gain as many places possible. I held position on the first after I overtook two drivers but I got overtaken by two other drivers. From laps 2 to 3 I got overtaken twice up the hill into Christmas corner but during lap 4 I overtook one driver on the brakes into Christmas corner and another on the following braking zone of Ashby. I was now in 8th and was chasing down p7. On lap 8 I made a move into the boot but a few corners later on the following lap I got re-overtaken and fell back down to p8.

I was starting heat 3 in p21 and was hoping to finish top 15. It was also quite wet so it was my first time on Komet wets. On lap 1, I kept out of trouble and with a few overtakes I crossed the line to start lap 2 in p13. On lap 2 I made an overtake into Ashby and moved up into p12. Later on in the lap someone in front of me spun and moved me up into p11. On lap 3 I took to much kerb at Christmas corner which spat me out of the corner and sent me into a half-spin. This lost me two places so by the end of the lap of the lap I was back down in 13th. Over the next two laps I gained 2 places back with overtakes into Christmas corner. Until the final two laps I was slowly catching the driver in front . On the penultimate lap a driver a few places ahead of me spun through turn 7 gifting me another place. On the final lap I made another overtake and got up into p9.

Before the final we noticed the track was drying out, it was a bit damp off line but slick we’re going to be the quicker tyre. On lap 1, I took too much kerb at turn 5 and got bounced onto the grass. This lost me a couple of places and I finished the lap in p9. On lap 2, I got a really bad exit out of turn 2 which allowed the driver behind to catch up and send it up the inside. After I got overtaken I got a bad run towards Ashby so I lost another position. A couple laps later I unsuccessfully attacked the driver in front which gave me a bad exit which allowed the driver behind to get past. These first few laps were really bad so I knew I had to bring things together and try to gain back the places I lost.

On lap 5 the battenberg flag came out after two drives ahead crashed into turn 2. This moved me back up into p9 and let me catch back to to the leading pack. On the restart, on lap 9, I gained three places. One of these overtakes was on the brakes into Christmas corner, the 2nd was made when someone ahead went straight on at Ashby. The final overtake was make when a driver in front ran really wide out of the final corner, cooling down their tyres and letting me past. On the following lap the leader got spun which moved me into p5. I could now see the podium so that was what I was aiming for. On the penultimate lap I made an overtake into Christmas corner and moved up into p4. I was now right on the back of 3rd place and was within overtaking range. On the final lap, through turn 1, I ran over the oil on the circuit that caused the full course yellow and battenberg earlier in the race. This took away all control of my kart and I hit the barrier head on at about 50mph. This broke both bones in my right arm, resulting in a red flag and trip to hospital. So I am now in a cast for 4 weeks, and will out of driving for 3 months.

The race result went back a full lap so I was classified in p5. Thanks to everyone for the kind messages, I’ll keep everyone updated on my Instagram and Facebook.

This result meant that i finished the season 10th overall from 69 drivers who raced WMKC throughout the year.