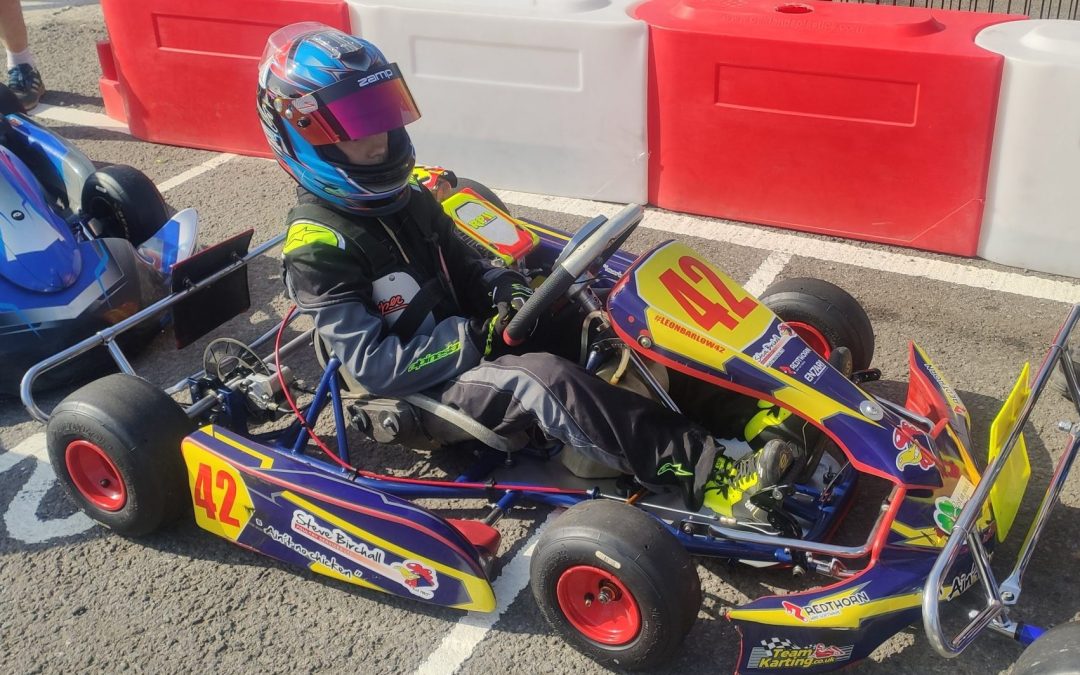 Because of lockdown 3 I hadn’t driven since December 2020. So the day before race day (a Wednesday) at Teesside I tested at Hooton park to blow off the dust. Tuesday at Hooton park went pretty well, managing a 41.7 towards the end of the day (last years record lap time was only a 41.6). I also tested my new engine which turned out not to be much faster that my old one but it still does need running in.

Even though plenty of drivers were testing the day before, many hadn’t been out in months. Therefore there was a 20 minute practice session before qualifying. Coming out of the pits at the start of the session my clutch wasn’t engaging, forcing me to miss the first 10 mins of the session. When I went back out onto track I instantly damaged my kart by someone spinning directly in front of me, causing me to hit them, bending my track rods and left hand stub axle.

In qualifying I went out towards the back and behind one of the favourites to win the final. This would allow me to follow their line and get a lap as fast as theirs. This plan worked as even though I only got one lap in without any traffic, it was good enough to get me 3rd in class out of 30 drivers, with a 48.59.

In the first heat, I was starting 3rd in class (5th overall) which so happened to be my best starting position at this track to date. Off the start the person in 4th place flew off the line moving him up to 2nd and making me move down to 4th. The whole race 3rd place and I were working together to try to catch up to the two karts in first and second. On the last lap we had caught up but not enough to challenge for the lead of the race. Going into the first hairpin I dove to the inside getting me up into 3rd place. In parc ferme, we found out than my dad put the wrong sprocket on, making my kart illegal, therefore disqualifying me from the race. We had run a 70 tooth sprocket at Hooton the day before, and had forgot to put it back to a 68 tooth.

In the second heat, I was starting last (or 34th) and was hoping to getup into 10th place at least. It was extreme but it was still possible. Off the start and into the first corner I moved up into 18th place and I held position until the end of the lap. On lap 2 I gained another place, putting me into 17th. On lap 3 I was up in 12th and on lap 4 I was in 10th. I gained 25 places in 4 laps! Lap 5 I stayed in position but on lap 6 I gained another 2 places putting me into 8th. I didn’t move on lap 8 and on the final lap I gained another lap. Overall I finished 7th but 5th in class. I was extremely happy with my drive, staying out of any trouble, and overtaking at every opportunity.

In the final I was meant to start 31st but the marshals put me in last again. 🙁 . Anyway, on lap 1 I was in 17th, lap 2 in 14th (already better than heat 2). After lap 3 I was up in 13th but I stayed in position until lap 5. In the 6th lap I gained another 4 places putting me in 9th (also I overtook 4 karts in 1 corner 🙂 ). On the same lap there was a huge crash in front of me involving a backmarker and someone in a different class. This incident caused a red flag, stopping me from gaining any more places. I ended the race in 7th in class with 3 laps remaining but I’m confident could have really pushed for a podium if the race had restarted after the red flag.