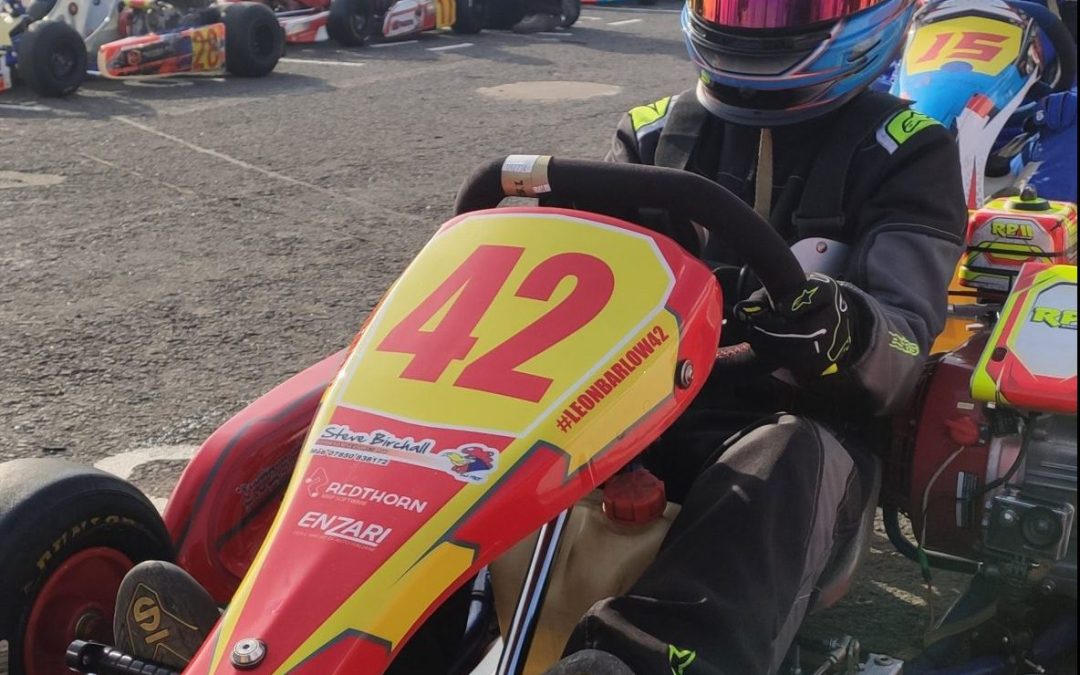 The day before race day I was on very old tyres and I managed to break my personal best lap record. This made me excited for what was to come. There was meant to be a grid of 31 cadet 200 (similar size to the ‘0’ Plate), and no doubt equally as tough.

For qualifying, I was aiming to go out at the front. Halfway through the session, we found out that my transponder wasn’t working (again!), so all of my laps previously didn’t count. I came in for a transponder swap and I now had 3 laps to register good lap time so i started heat 1 near the front. This didn’t go as planned as every lap from now on I had to get past slower karts. The fastest lap that was picked up was only a 48.17, this was only good enough for 8th place overall (7th in class). I how had a lot to do to get the podium that I have wanted for nearly 3 years…

As I was saying, I was aiming for a podium in the final race of the day, which I would later find out was very hard as the top 5 were separated by almost nothing. I was starting on the outside for turn 1 so I needed to get to the inside ASAP. This worked as I overtook to drivers off the line and was immediately up into 5th in class.

The rest of the race was pretty uneventful as we were trying to pull a gap to the karts behind (with occasional small battles off course). However, onto the last lap, we caught up to a backmarker. The three leaders got passed with ease but 4th place and I caught up at a particularly bad place. 4th place had to slow down to get past which I didn’t expect to happen. This caused me to hit them, making them go into a spin. I finished 4th and the driver that span finished 23rd. (Sorry Bella!)

For the 2nd heat, I was starting 4th. Off the line, I was starting on the inside so I couldn’t (easily) be overtaken. Over the first 3 laps, the two leaders began to pull a gap which wasn’t good. This was partly because they were working together to pull away and partly because I was fighting for 3rd place. Later on, I noticed this so I began to work with the other driver to catch back up. Just as we caught up, on the 6th lap, one of the drivers that were in the lead span, allowing me to get into 3rd. On the next lap, the new leader went to the outside of a backmarker while I went to the inside, allowing me to get past and up into 2nd. This is where I finished as it was the last lap. My highest ever finish at Teesside.

After the lunch break, I was re-energised and ready to try to win the third heat. After the first lap, I was down in 4th place. I stayed here until the last lap where on the first hairpin I when to the inside of a drive that was fighting for the lead 2 laps before. I made this move stick and as up into 3rd place. On hairpin 3 the same lap the two leaders collided and one of them span, I got up into 2nd and that’s where I finished.

For the final, I was starting 2nd with 143 raceday points. At the start I tried to punch the leader as I had nowhere to go, this caused me to once again fall into 4th place as the driver behind us got a better start. On the third lap, I made a lunge to the inside into the 3rd hairpin, I had the move secured and I was up into 3rd. I then lost this place once again on the next lap going into south bank.

On the 7th lap, we caught up to a backmarker, this allowed me to catch back up to 2nd and 3rd as they had pulled a small gap. On the third hairpin of the last lap, I sent it to the inside, this briefly got me up into 3rd and nearly 2nd on the 4th hairpin, but as I had a bad exit I was alongside 3rd place. On the next corner (if you can even call it that) I got squeezed to the inside causing me to hit the driver that I was alongside. This gave him a boost and cause me to scrub speed…

I was only 7 hundredths of my first podium, and get my fastest ever time of 47.429 at Teesside, but i’ll be back.