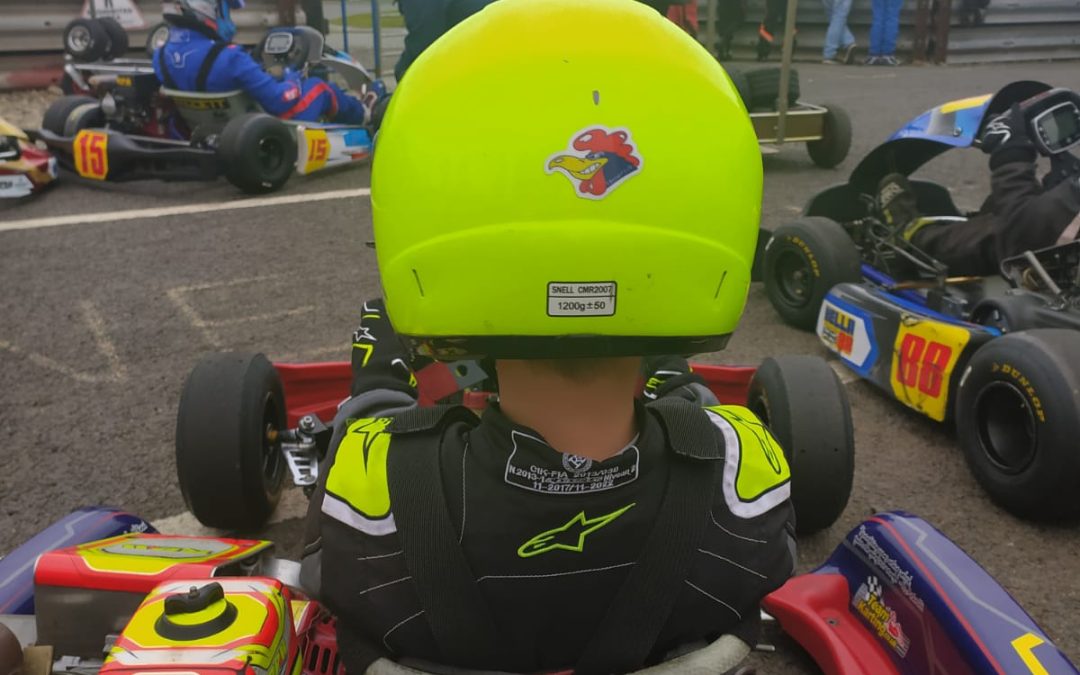 On Friday we put on my new stickers with my new sponsor, Steve Birchall Poultry Services Ltd. However, as we were in a rush we did them wrong and there were a few bubbles in them. Not a great start to the weekend.

On Saturday we were having a lot of problems throughout the day, barely finish any of the sessions. In the end, we only got one good session. Luckily, in the session that I didn’t have any problems I was quite fast and had good pace for Sunday. It’s always good to end a practice day on a bit of a high.

In qualifying, we, for once, went out in a good place and didn’t get stuck in traffic. For the first few laps, my tyres were cold and I couldn’t set a good lap. However, on the 3rd lap my tires had warmed up and I set 49 flat. I then caught up to traffic and had to get past. After I had passed the traffic, (only took a lap) I set a 48.8, followed by a 48.686, further followed by a 48.677. This would be the fastest lap that I would set in the session as my tyres went off. As I was on 150 lap old tyres, whereas those ahead of me were on brand new ones, I was ecstatic. This time was good enough for 5th beating my previous best qualifying position by 3 places, it was looking to be a good day… I was targeting a podium.

Off the start, I stayed in position but into turn 1 I tried to go to the outside and I hit a wet patch, consequently losing me a place. I then locked up into the last braking point on the track, running me deep, and losing me another place. I stayed in position for the next few laps, with around a second to the kart in front and same to the kart behind. However, on the 6th of 8 laps, one of the leaders span and I got up to 6th. I stayed in position until the end of the race, making it one of the first races at Teesside that I would lose a place. Most of the time I would gain places during the heats, unless there was an incident.

For the second heat, I was starting 6. Off the start, I didn’t make the mistake of going to the outside on turn 1 as I did in the previous heat. I still lost a place as someone from behind went around the outside of me on turn 1. Luckily, I got them straight back into the first braking zone; hairpin one. Further on in the lap, I got sent down the inside losing a place and falling down into 7th. While stuck behind the driver that had just overtaken me, on the 3rd lap, the driver behind went past us both. Going onto the 7th of 8 laps I broke late going into the first of four short hairpins. I stayed in position for the rest of the race, slowly pulling a gap to the kart behind.

Off the start, I was of course starting 7th. Off the line I got up into 6th place but got re-overtaken into turn 2 (the hairpin). I now had a lot to do to get a good average so I would start in a good place in the final. I was stuck behind the kart in front for the rest of the race until going onto the last lap I went around the outside into the D (the first chicane) and moved up into 6th.

Starting 7th I had a lot to do to get back to where I qualified at the very least. Off the line, I stayed in position. However, halfway through the 1st lap the leader’s engine at this point in times engine literally blew up. This jumped me into 6th place. Over the next few laps, the 3 leaders broke away from me, in 6th, and 4th and 5th place. As they were breaking away, we also broke away from 7th place onwards, build a large gap. However, on the 9th of 10 laps, it was time to attack and I was on a roll. I got past and up into 5th place in the 2nd hairpin and was about to go past 4th place until disaster struck. The kart in front suddenly slowed down without me expecting it. This caused me to have to also slow down as I was right on his tail. Furthermore, making the kart behind me that I had just passed, rear-end me. This consequently made me spin and drop me into 7th place. I was absolutely gutted but quickly got over it. You have to. The person that rear-ended me apologised and I forgot about it. Sooo… onto the next 1 🙂