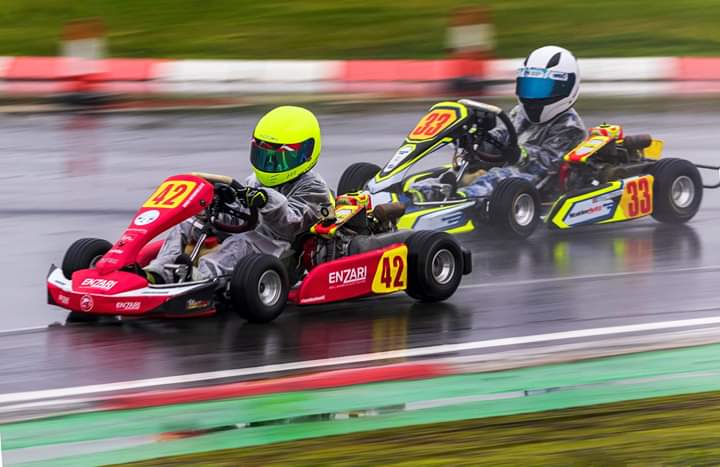 Well, new season, new driver (or something like that). This season at Teesside I was aiming for a podiums, as my best finish last season was a 6th, but as the weather wasn’t looking good and I had awful tyres because my new ones hadn’t turned up in time, I didn’t have too high hopes.

As I was saying before, my tyres are awful! They were really intermediates, not wets. I had no control of my kart at all, it was under steering all over the place. In the end I got a 57.594 which was only good enough for 16th of 19 drivers.

On the start I gained only one position as there is a new grid and it is really spaced out. For the rest of the lap I was on my own, as there was a crash behind me. Until out of nowhere my two ‘team mates’ had crashed and put each other into the tyre barrier. Now I was in 14th as I had been over taken under yellows. Two laps later, on lap 4 me and the kid in front caught up to another kid and we both got past. I couldn’t get past so i finished the race in 13th.

In Heat 2 I was starting 13th but on lap one on the first braking zone I went to dive-bomb somebody at the same and the driver behind me so we collided and we both got sent to the tyres, I was now in 17th place and had to try really hard to try and work my way back up to at least 13th place. On the lap after I crashed. I got up into 15th and was now chasing p14. It took me a lap to catch up but I got past quiet easily. My next overtake was on lap 6 when #CharlieWyatt23 had to go in the pits after an engine problem. Later that lap I got another place and was now in 12th. On the last lap I nearly got up into 11th but I ran out of laps.

Heat 3, I was starting 12th and we were now on slicks for the first time this weekend. I wasn’t sure what setup as we had done zero testing on these Dunlop SL3 tyres. So use so we decided go with a standard dry setup put the tyre pressures up to 30 at the front and 31 at the back. As I was driving round for my out lap I could feel my kart under steering and over steering all over the place. At the start I fell down to 13th as I had no grip or balance and I just bogged down. The kart was a mess. On lap two I went down to 14th place and on lap 4 I went down to 15th. I stayed here for the rest of the race and I was just falling back.

In the final I was starting an average of 12th. I had changed my tyre pressures and was hoping the drop in air temperature wouldn’t differ me. It did, on the start I lost two places but I also gained two so ending lap on I was still in 12th. On lap two I lost another three places and was now in 15th. For the rest of the race i was all over the kid in front but I couldn’t get past. In the end I finished in 15th and was classing this as a drop round as we were allowed 2.

This season I am doing Cadet Kart Championship (or CKC). It is an all RPM GX200 Honda cadet championship founded by Matty Street. I am very exited about joining CKC and am ready for taking on the challenge of driving at new tracks across the country such as Whilton Mill, Fulbeck, Lydd, and many more. There is many well known drivers with many titles driving with CKC this year.

Go to https://cadetkartchampionship.co.uk/ to find out more.