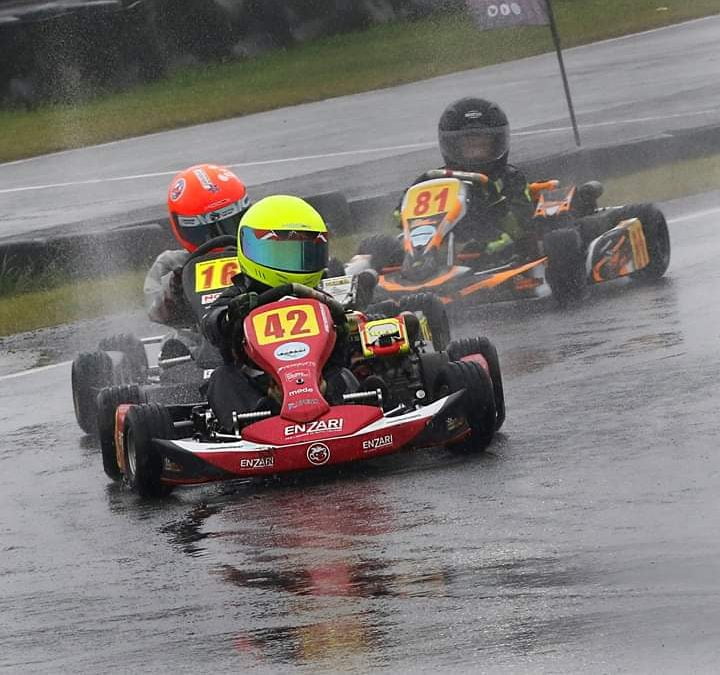 Round 8 followed straight on from a terrible round 7. The weather was still awful, my tyres were getting worse, and I was wet and cold.

As it was still wet, I was still slow. 1:01.91 was my best lap time that my Alfano caught. 3 seconds slower than last month in similar conditions. When I came in I was dying to find out what position I had qualified. My Dad came over to me and said, “Your transponder wasn’t working”, so we went to race control and told them. They asked for my best lap time and gave us a new transponder.

I came round to line up and my brake fell off as a bolt had become loose. They locked up and I had to go off on the quad-bike trailer before the race had even started. Go to 2:15.00 here https://www.youtube.com/watch?v=laiyIkOx9Ts to see that.

Because I didn’t start Heat 1, I was starting 23rd for heat 2. At the start, I didn’t gain any places but I didn’t lose any neither, luckily for me, there was a crash in turn 2 that put me in 21st on the next lap somebody span I was now in 20th. Two laps later I overtook someone which put me in 19th that is where I finished.

I had an amazing start and I overtook two people which put me in 17th on the next lap someone span, I was now in 16th. For the rest of the race, I had to defend because I had no grip. I finished 16th. Not a great round, but at least I got through it without breaking anything.

I can not remeber the final at all!!!