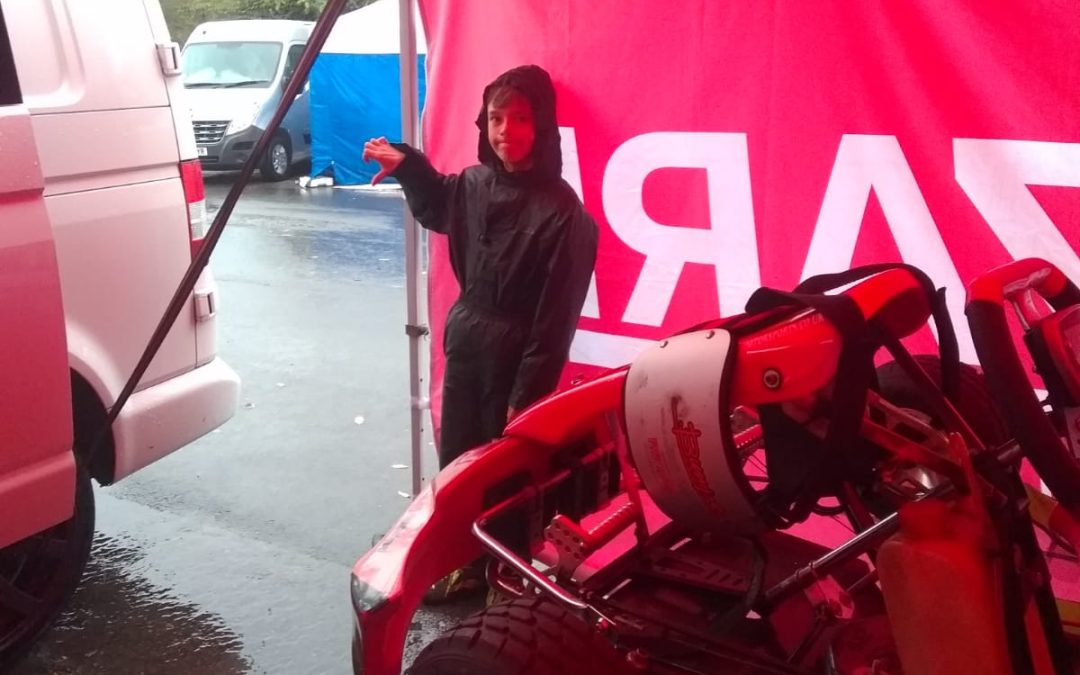 On Saturday we did a pre-race practice. It was wet for the first two sessions but it dried out later on in the day. This wasn’t very helpful because we need to set the kart up for the wet because the weather forecast said it was wet on Sunday.

Sunday arrived, IT WAS VERY WET, so wet that they had to put cones around the puddles and get a pump to pump the standing water (which didn’t do much because it was raining too much). As I didn’t have much experience in the wet so it was going to be tough.

Because there was a power cut they didn’t record qualifying so I cant put the link to the video here. All I remember is that my wets weren’t very good and I qualified 16th out of 19. We had to make changes to the kart to find some grip.

We put pads in my seat to try and lift my weigh higher up so I could get more grip in the corners. Before heat 1 my dad said, “If you get 10th or better I will get you a brand new set of wets.”

In Heat 1 I had an amazing start and jumped up to 9th but went straight down to 10th and down to 11th on the next lap, (there go my hopes of getting new wets). On lap five I got overtaken by Jack Thompson and went down to 12th. I thought that I had 12th but I went too deep into the last turn of the last lap and Charlie Wyatt passed me (he started 2nd but got shoved off the track at the start). In the end, I finished 13th. It looked like the changes worked.

In the break, It had been raining ALOT, the puddles had doubled in size. It was so wet that 7 of the 19 had decided not to race. I was starting 13th. This time I had a bad start and went down to last (which was only 14th). For the first lap, all I could see was the curbs due to all the surface water and spray. On lap two David Mack span and went behind me, I defended for two laps but he eventually he got past me because I had no brakes. I suspect I had WD40 on them because we were trying to keep as much water as possible of the engine. So for the rest of the race, I was in last place.

There wasn’t one! This was because the rain had got so bad the puddles had covered the whole of turn one. We all got called up to the cafe and got told that we were going to finish heats 3 and the final next month at the double header.

It was still wet, but not as wet as last month. As we were getting closer to the end of the season my wets were turning into intermediates so I had no grip at all. I was racing as hard as I could but it just wasn’t good enough, in the end, I finished 20th out of 22. (Also Alpha Timing said I DNS because my transponder died, although I didn’t know this yet)

As I had an average finishing position of 15, I was starting 15th for the final I got to 10th on the start but went down to 12th on turn one. After a lap of driving I locked up on turn 2 and span, I was now in last. As I was chasing I locked up on the same corner and went into the tires. Now I was far behind with only 3 laps to go I was never catching up. I finished last. (I still didn’t know that my transponder wasn’t working).

As the end of round 7 and round 8 were on the same day, I kept my transponder. (Go to Teeside-Round 8 to find out what happened next)