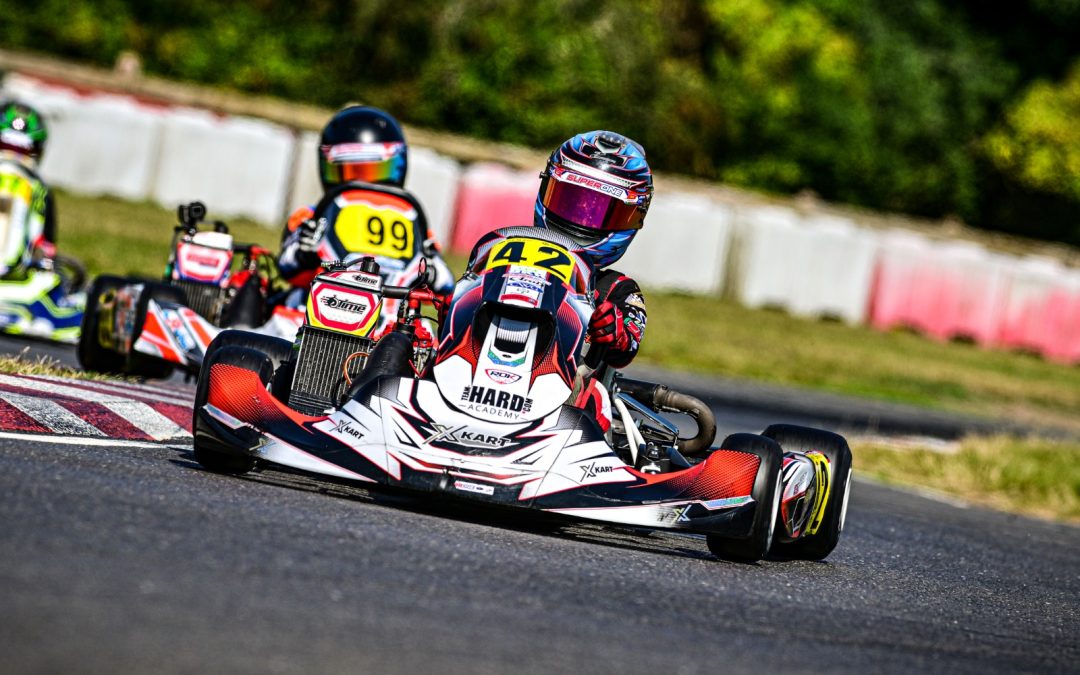 This weekend was my first time at Super One. These rounds were at Whilton Mill so the team and I know this track very well, so we were to attempt to be fighting at the front in every class we entered. I was going with the XKart team to hopefully get a bit of silverware. If you don’t know, Super One races on both Saturday and Sunday. With qualifying, two heats, and a final on either day. Another different thing about Super One is that they race on Levanto tyres which are a really soft compound so it would be difficult to make them last for two days.

The plan on Friday was to be at the front of the pack on lap times, presenting myself as a threat to be reckoned with on the two race days. This didn’t go to plan, however, as at the start of the day I really struggled with pace. I was almost 2 seconds off the pace with no explanation other than the fact I was on Komets instead of Levantos! I spent the first three sessions slowly getting quicker until the fourth session when we put on a test set of Levantos. I immediately went quicker and was one of the quickest on track for the last 3 sessions.

In qualifying, I decided to go out at the back, with a driver that is frequently at the front of WMKC. At the start of the session, I fell away from him a bit with cold tyres but as the session went on, I gradually began to close him back up. Every lap after lap 4, I went quickest on track. My best at the end of the session was a 46.188 which, surprisingly to me, was good enough for pole position! I was only 0.049 seconds quicker but a P1 is a P1.

Starting on pole, I knew that if I had a good start I would be able to stay right at the front for the entire race. At the start, I was too hesitant into turn one so the driver in second immediately got passed. I stayed in second place with about a 2 tenth gap to the leader until lap 5 when the driver behind sent it up the inside of me into Christmas Corner. I once again held a gap of around about 2 tenths until lap 7 when I copied the move that I had done on me and got back up into P2. Me and the driver behind then worked together to attemt to catch the leader as the gap had grown a little. Going onto the final lap, the gap to the leader was still 2 tenths to I decided to go defensive on the kart behind. I stayed in 2nd over the line which gave me a good few points towards the final. There was only 2 heats so the points you get from them matter even more than usual.

Little did we know, in Super One you start both heats where you qualify, meaning I was starting on pole again for heat 2. Once again, at the start I got overtaken into turn 1. On lap 3, the driver behind got a better run than me out of the final corner, meaning they could pull alongside me into turn 1 and get passed. I worked with the driver that just passed me until we both caught the leader. Up into Christmas corner on lap 5, the driver in 2nd went for the lead, so I followed him through. I was now back into 2nd place and I felt like I had the pace to win. So on lap 7 I went for the overtake into turn 8. I stayed in the lead until the checkered flag and won with a comfortable 6 tenth lead.

With a second and a win, I was starting on pole for the final with 67pts. With the advice of my team, I got a really good start and I stayed in the lead for the entirety of the first lap. On lap 2, however, I completally messed up my turn 1 and 2. I took too much kerb which made me nearly understeer off the track. By the end of the second lap, I was all the way down in P4. On the following lap, I began to see the win (or even a podium) fall out of my hands, so I overdrove the kart and made another mistake. During lap 4, I regained my consentration and began to close up the gap to the next kart. On lap 5, I sent it up the inside of the driver in 5th into the turn 6 of Ashby. Until lap 9, I really struggled to make an overtake work but on this lap I finally got up into 4th with an overtake into turn 8. I had a one lap break as on lap 11 I got another driver with an almost identical overtake and was up into P3. On the final lap, I put loads of pressure on the driver in 2nd, forcing him into a mistake at Christmas Corner and gifting me p2.

After the race I realised that I had a drop down penalty after going over a bump on the exit of the pits, as I certainly didn’t come into contact on the track. This demoted me all the way down to 7th but I knew not to give up as there was another race day ahead of me on Sunday.