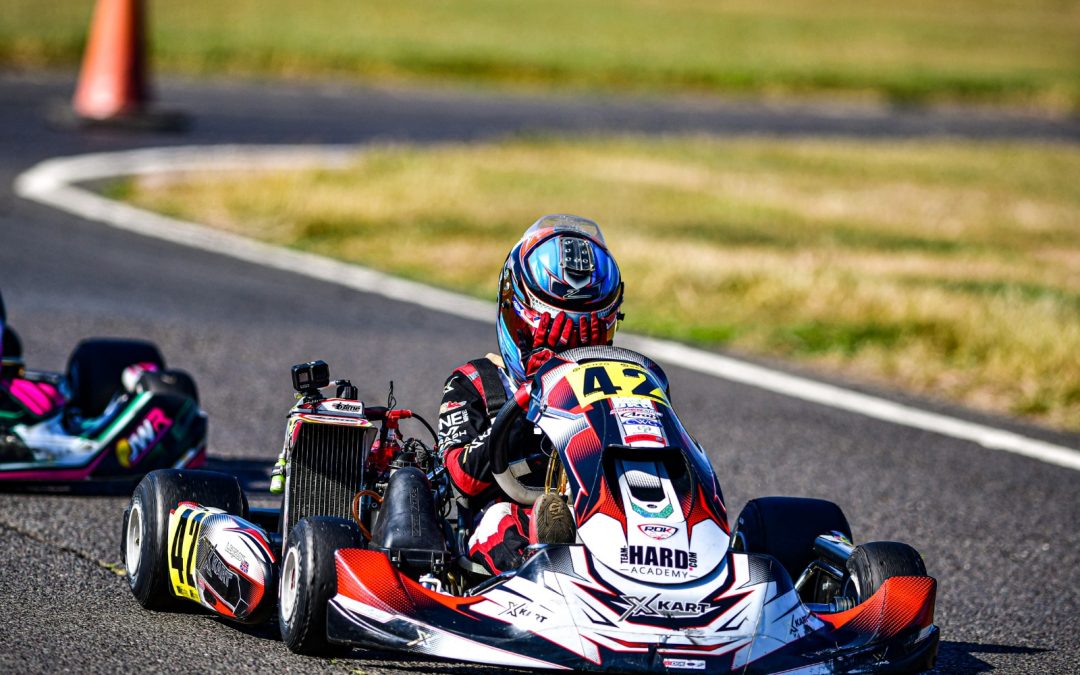 This blog is continuing from Round 9. Make sure to go read that first.

In Sunday’s qualifying session, I went out right at the back with Saturday’s winner. For the first half of the session, I really struggled to put a lap together, until about halfway through the session Saturday’s winner overtook me. This is when I began to start to find a bit of pace but I was still over three-quarters of a second off of my Saturday pole lap. My best lap was only a 46.951, which was only good enough for p8. On the bright side, I was just over 1 tenth off pole position.

As the lights went out I knew that starting in 8th place it was very important to not get a drop-down. Into turn one, I held position. On the run up the hill, I couldn’t get to the inside, so I decided to send it around the outside. I didn’t gain any places from this but I also didn’t lose any either. However, into Ashby, I got sent up the inside losing me one place. Later on in the lap, I re-overtook the kart in front with a dive bomb into turn 8. On lap 2, the championship leader got passed me into Christmas corner, moving me down to 9th. I stayed here until lap 4 when I sent it on the brakes into turn 6, promoting me back up into p8. During the next lap, I copy pasted the move into Ashby onto the driver in front. I was now into p7 and was hunting down the driver in 6th. Once again, on lap 6 I got passed another driver. This time it was into turn 8 so I was not up into p6. Onto lap 7, the gap to the driver in 5th was over a second so I had to push really hard to catch back up. Over the next few lap, I was setting fastest lap after fastest lap to attempt to catch up. With one lap to go the gap was 3 tenths, just out of reach for an overtake unless they make a mistake. This is exactly what happened as into turn 7 they got over the bump on the entrance of the corner, sending them wide and allowing me to squeeze through. I finished in p5 and there were no penalties ahead.

With a P5 I needed a top 4 to be towards the front for the start of the final. Into turn one I got sent up the inside, moving me down a place. On the exit, however, multiple karts collided causing me to move up into P7. Nothing else happened on the first lap but on lap 2 I got passed the kart in front into turn 8. This overtake showed to be my favourite in this race. I stayed in 6th until lap 4 when I got another overtake into turn 8. On the following lap, the driver in front made a mistake through turn 7 which allowed me to get yet another overtake into turn 8. I was now in 4th place but there was a small gap to the next driver. This gap didn’t stay for long as through the boot on lap 5 I got right on the rear bumper of the kart in 3rd. On the run to the boot on the next lap, the driver ahead went defensive, meaning they knew that they were under pressure. I took this as an opportunity as when he moved back to the racing line, I stayed on the inside and got the overtake. While I fought, a gap of 7 tenths had been pulled out between 2nd and myself so with only 1 minute 25 seconds to go, I had to push very hard to catch the gap. Over laps 7, 8 and 9 I was slowly catching up until the final lap when I was right on the rear of 2nd place. I couldn’t quite make the overtake happen into Christmas corner but I did apply the pressure which made them run wide. This ruined their run to Ashby, which gave me the opportunity to make the overtake happen. I took the opportunity and got up into p2. This is where I finished as the leader didn’t get a penalty.

With a 5th and a 2nd, I had 63pts which put me on pole for the final. This was a bit of a surprise but I knew that I had the pace to win. At the start, I got away really well so I could come to the outside to optimise my turn 1 and 2. I didn’t need to defend into Christmas corner which pulled out a bigger gap to the karts behind. By the end of the first lap, I had a 7-tenth gap to the kart behind. By lap 2 the gap was nearly 9 tenths, however on lap 3, I made a small mistake which brought the gap down to 6 tenths. I knew that the gap was getting smaller so I began to over-drive the kart, something that most drivers do when leading for the first time in a while, forcing me into many mistakes. By lap 6, the gap was down to 2 tenths. On lap 7 there was a Battenburg flag that came out on post 8 (just before the boot). I thought that a Battenburg had to last at least one lap so when the green flag came out over the line, I was very surprised which forced me into getting a bad run. The bad run made me get overtaken into turn 1. Later on in the lap, at turn 8, I re-overtook the new leader, moving me back into first place. On lap 9, I once again got overtaken into turn 1 after a bad run out of the final corner. Into Christmas on lap 11, the leader outbroke himself, sending him deep and allowing me to get through. Over the next few laps, I stayed in the lead and as I saw the last lap board, I immediately went defensive. Up the hill into Christmas corner, I went defensive but as I checked my shoulder, I noticed I didn’t need to defend, so I came back out to the racing line. Into Ashby, I over-defended, (a big mistake) making me have a very bad run out of the corner. Into turn 7 I got rear-ended, forcing me wide and allowing 2 drivers through. One of the drivers cut across me, spinning him out of the race. I was now in 2nd and had no way of getting back into the lead. I was very disappointed as I knew that if I hadn’t over-defended I would have won the race.

After the race when waiting for the podium, the winner got called to race control, (Did he get a penalty?) so we checked the results and there it was, ‘+5 Positions, Gaining an unfair advantage. Apparently, he had caused the crash at the end of the race, gifting me the win!