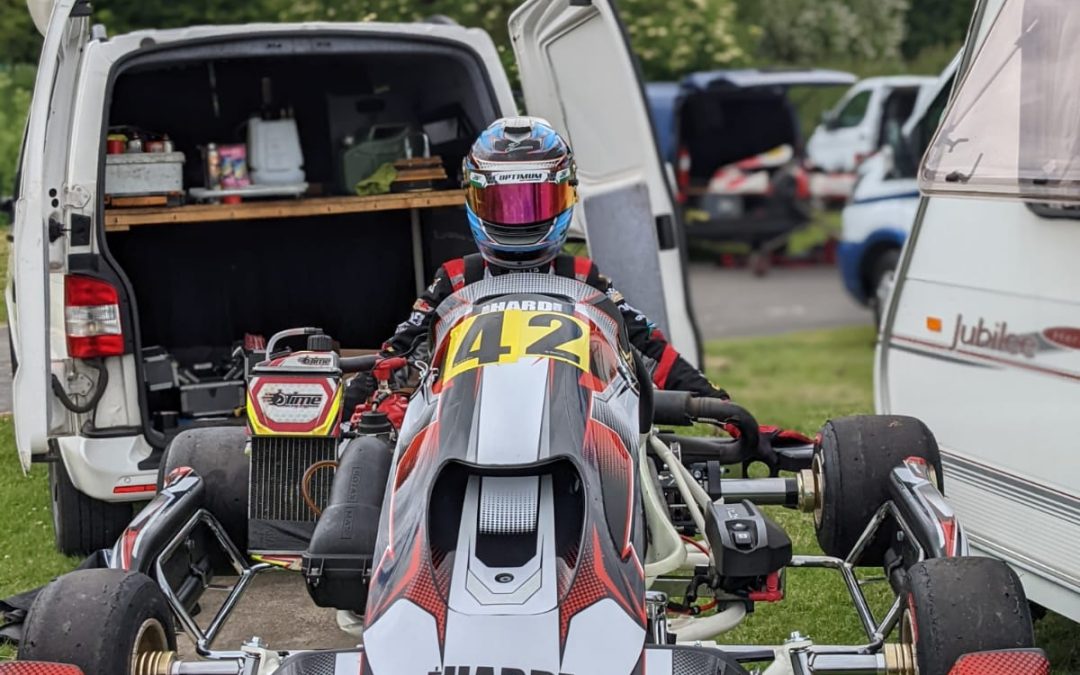 After a disappointing weekend at Lydd for round 4 of CKC, we decided to go to Wombwell for a ‘practice race’ to try to find why I was so far off the pace in Lydd. We weren’t bothered about the results so we were just going to make big changes to the setup and try to find my pace. It was also my birthday weekend so my mum and brother were coming to support me.

On Friday, we found out that one of the reason for me being so far off the pace at Lydd was my chassis being bent by 4mm on one side. This is a lot for a kart chassis. We had already booked Wombwell so we were still to go and practice

On Saturday, I woke up to find out that my dad forgot to print off my main present so I wouldn’t be able to get it until Monday. This is what I thought until I opened the back doors of the van to find a brand new 2022 X-Kart. We hadn’t come to Wombwell to practice on my 2021 chassis, we had come to race on my new 2022 chassis. The 2022 chassis had many improvements on the 2021, plus my chassis had now done quite a few miles and had become soft. I’d never driven a 2022 chassis, or a brand new chassis for that matter, so didn’t really know what to expect.

After a long wait (at Wombwell, practice and racing only start at 11:30), I was finally able to drive my new kart. As soon as I went out of the pits I noticed that even on cold tyres and a green track, the kart just sticks to the track in comparison to the 21 chassis. I would turn into a corner and where before it would just understeer, it responded really well and went around the corner like nothing else. It was far more stiff and it even shocked me how well it turned in.

Later on in the session, once the tyres were up to temperature, it only got better. At a corner where I had to lift to get the nose turned before, this chassis took it easy flat like it wasn’t even a corner. It felt like it was super glued to the track. I had so much confidence in the brakes as the kart was really stable under heavy braking, where my old chassis would squirm about.

At the end of the day, my best lap was a 33.9, less than a tenth off four of the drivers that race here every month. We felt like we learned quite a bit about the kart and how it drove so it was on to race day.

In heat 1 my random grid spot placed me 5th out of a small 7-driver grid. I had a really good start which allowed me to get up into 4th by turn 1. Out of the hairpin, I got a really good run which gave me the opportunity to pull alongside through the flat-out right-hander. Being on the inside, I easily got past and I was now up into p3.

On the next lap, I had a bad run out of turn 1 which gave the driver behind the opportunity to overtake me into the hairpin. Due to my lack of experience on this unique track, I was unable to defend the position. During lap 3, I got easily overtaken into turn 4. This is a corner that is really hard to defend at if you don’t expect the other driver to make the move. On lap 4, I got another bad exit out of turn 1. I had been struggling to get on the power here all weekend. My bad exit allowed the driver behind to get right on my rear bumper and to get past into the hairpin of turn 2.

For the remaining laps, I was right on the back of the 3 karts in front of me but, once again, my inexperience with the track made it difficult for me to overtake. I was struggling to find the later braking points so I finished in 6th, quite disappointing but I knew that I had the pace to be right up in P3.

I was starting on pole for my second heat. Into turn 1, the driver alongside me held it around the outside at just managed to get ahead by the time I got to the apex. I defended from the drivers behind into the hairpin but the driver behind forced me deep, allowing 3 more drivers to go by. 1st to 5th in 2 corners! OUCH! On the next lap, I began to notice that my old tires were really showing signs of falling off the cliff. Most of the grid were on new tyres, and a couple in 1 day old tyres. I seemed have no grip anywhere, compare to the day before. My engine also developed a kind of misfire out the the bumpy corners, which turned out to be poor or dirty connection on the electrics. Because of this, the two drivers behind got past me, putting me down to 7th and last. Over the next few laps, I slowly began to fall away from the next kart. At the end of the race, I was a whole 3.5 seconds off of the next kart. After penalties, I was classified 6th.

For the third heat I was starting 7th, so was only expecting to be right with the pack and hopefully, get a few cheeky overtakes. As the lights went out, the pole sitter had an issue with acceleration, so I was already in front into turn 1. Going down to turn 2, they were already seconds behind, so they were no longer in any chance of being in the pack.

Not much happened until lap 6 as I was just sitting right behind the next kart in front of me, waiting for an opportunity to get past. My wishes we answered, as coming out of the hairpin, the kart in front of me got a bad exit, allowing me to pull alongside and to get past by the next corner. On lap 7, the driver in 4th missed his braking point into turn 2. This gave me the opportunity to get up into 4th and by the end of the lap, I was.

Over the next few laps, I was having to defend. This was until I got shoved deep into turn 2, allowing them to get past. On the final lap, I sent them into the penultimate corner. It is really narrow here so he wasn’t expecting me to make the move. Even so, they got a better exit and stayed ahead. I finished 5th after no penalties were given out. Still not great but much improved pace on the previous heat.

I had qualified in 6th for the final after two 6th place finished and a 5th. At the start, the driver that had a bad start in heat 3 had another bad start (moving me up to 5th). However, this time, it wasn’t as bad so they were still right on the back of the driver in 6th. On lap 4, the driver in 3rd spun into the final corner, moving me up another place and into 4th.

I was right with the pack, until lap 7 when I got overtaken into turn 4. I was now in 5th and had slightly fallen away from 3rd. Me and the driver in front decided to work with each other to catch 3rd. This paid off as by lap 11, the driver ahead was now up into 3rd. On lap 14, the driver in 3rd had an issue with his engine. So I was now back in 4th. I couldn’t make an overtake on 3rd place until the penultimate corner on the final lap. This is when I sent it on her and got ahead for the apex. Unluckily for me, however, they got a really good exit and were able to stay ahead around the final corner and over the finish line. I finished in 4th and there were no post-race penalties.