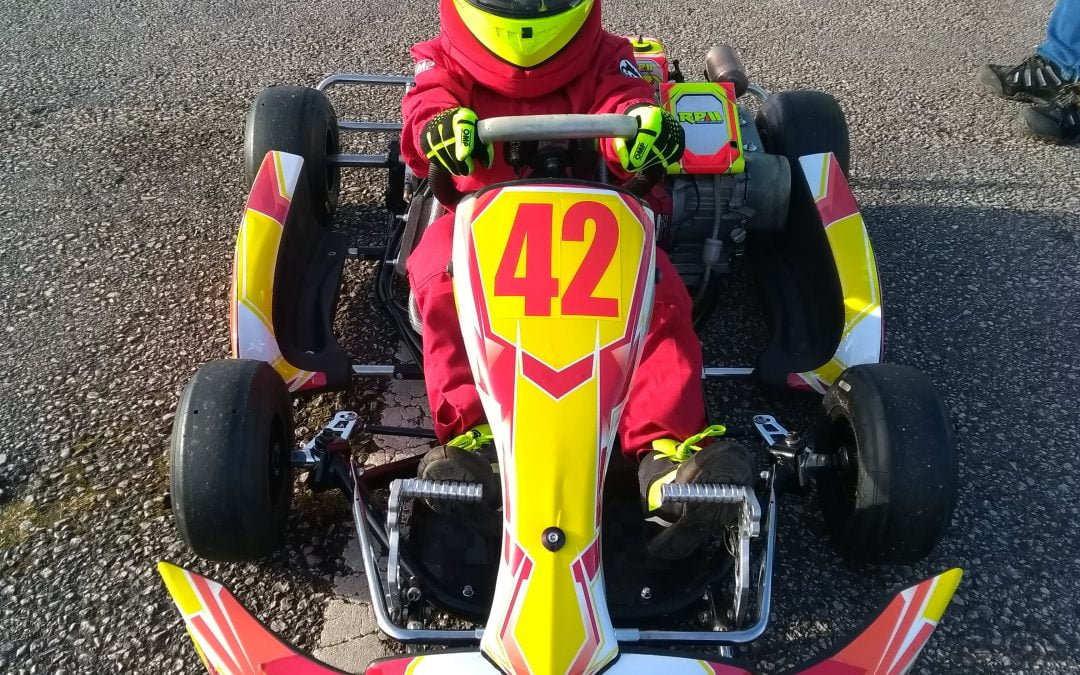 This is it! The first round of my competitive karting career; a rookie in the Indikart 2019 championship at Hooton Park, Cheshire.

It first became real on Wednesday before. My new stickers arrived and we fixed them to my scuffed bumpers, hiding battles scars of the former driver’s racetime.

I am not going to lie, today was tough, really tough. Came home really down, feeling I’d let myself down, but also like I’d been cheated.

In Indi Kart, there are four sessions:

Qualifying was really wet and slippy. I don’t have any new tyres yet, only the part worn sets that came with the kart. Two sets of worn wets (intermediates) and two sets if worn slicks. Straight from the grid, we had 6 minutes to go a get a quick time. In such conditions, 1 minute laps were the target, for me a least any. “Just stay on the track!”, “just stay on the track!”.

I had just no traction at all. I couldn’t brake into the corner, and I couldn’t accelerate smoothly out. The back end was so twitchy. Even with a wide front track and a narrow rear track, I think I managed 2, maybe 3 full laps without spinning.

Session ended and I feared the worst. I pulled into the pits for scrutineering again (this is were they check your weight, and you must be under 105kg). Matty (Team Boss) came with the time sheet. 1.09! I went faster than that on my first ever lap?? What’s going on? I was absolutely gutted.

When we get back to the truck, we have to enter all our lap data from the Mychron lap timer onto the computer. (This helps us see what times we can do different conditions with different setups.) I have a Mychron 4, which isn’t a fancy new lap timer with GPS, but it does a job. Best time 59.22 on lap 5. Eh? the official time sheet said 1.09 on lap one. Something is wrong here…

So we went to the scruteneers office to ask them to check. They agreed to swap the transponder, but obviously the result stood and I had to start from the back of the grid. 7 from 7.