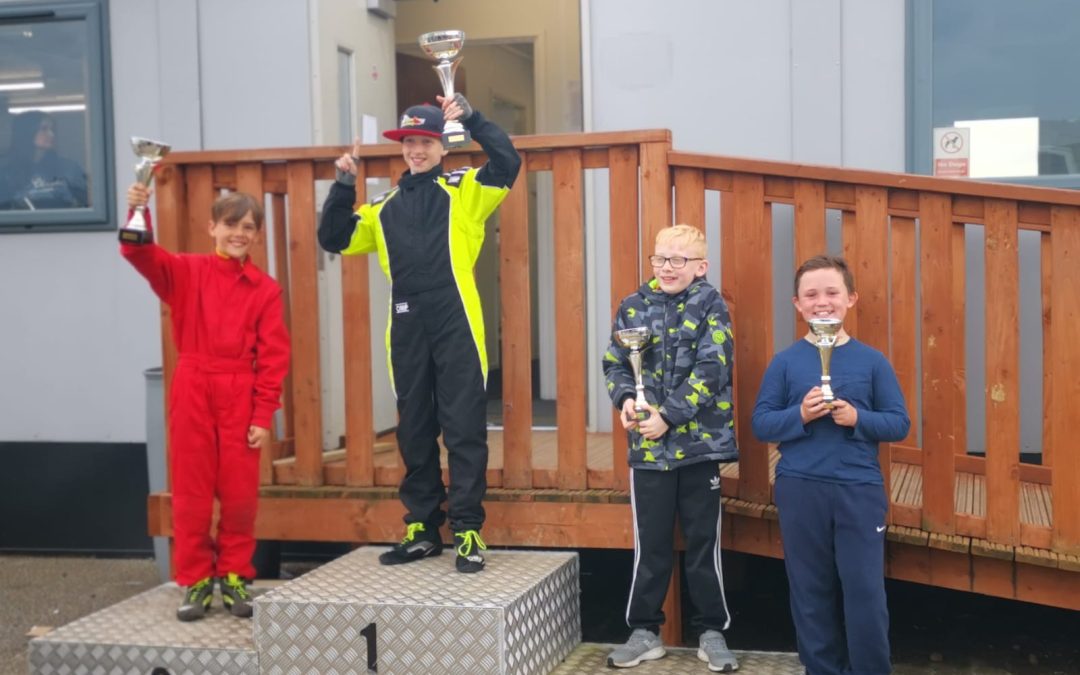 Sunday morning on the 9th June and it is a bright, sunny morning and it is time for qualifying. New plastic rear bumper because my metal bumper got destroyed at Three Sisters two weeks ago. Plus, we had to add another kilogram of lead onto my seat because my new bumper was a KG lighter.

I went out for qualifying but I was a second down off the pace, there was definitely something wrong, I couldn’t go any faster. The rear end was really loose. I came into park ferme and put my kart on the trolly, the first thing I did is I went to the back of my kart to see if anything was wrong. It was a good job that we had finished because my rear left wheel was about to come off, two of the studs on the hub had come loose and a couple more laps and the wheel would have come off.

My best qualifying lap was a 45.17 (which was 2.5 seconds off my PB) this put me in 6th for my first standing start. There were 11 people on the grid so to have any chance of a podium in the final I would have to gain at least two places up to the second row.

In Heat one, after gaining two places into the first corner, I ended up finishing 5th after a spin in the hairpin which put me in 6th but i got back in 5th straight away, unluckily 4th place was to far away.

In Heat two, it was quite a boring race nobody overtook anybody except from when the race leader went off on the second corner of lap one. In the end I finished 4th.

For the final, the rain was forecast so everyone was armed with intermediate tyres and buzz-guns for a quick tyre change before the start. Eventually, a dry race was announced and we lined up in the pits. The green flag went to tell us to set off on the formation lap. As we set off it began to rain we all only just made it round turn one. Even with a slight drizzle, the track was like an ice rink. As we lined up on the grid we were all nervous. It was dry tyres on a wet track. I was thinking to myself “To finish first, first you got to finish.” The lights went out. On the first corner three people in front span and I only just missed being in a crash. At this point, I was in second but on the 3rd lap, I span and went down to fourth for a few laps. Later in the race, 2nd and 3rd crashed this put me back in 2nd. However, on the 9th out of 12 lap race, the boys that had crashed were back on my tail, I would have to defend. Luckily I kept on the track and the rest just came. I ended up finishing in 2nd. My first of (hopefully) many trophies.