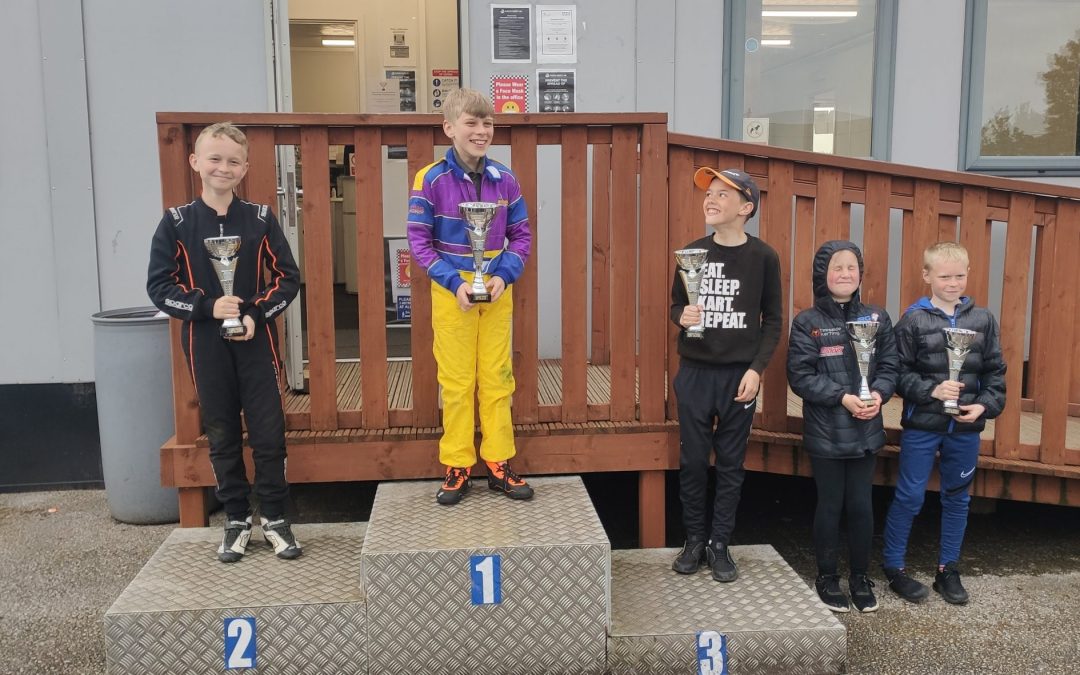 We were expecting a big grid of at least 19 for race day, which would have been the biggest grid at Hooton for a while in the Honda Cadet 200 class. When I first started in 2019, 12 was common, but it dropped to single figures and last year was really poor. Hopefully these big numbers continue, which will make it an interesting and worthwhile championship.

As we didn’t do practice on Saturday, I was going straight into race day. Which is fine as I’ve done hundreds, if not thousands of laps around this circuit.

In qualifying the track was quite cold with not much rubber as it had rained the previous day. For the first half of the session, I couldn’t get any heat into my tyres so my best lap was only a 43.5 which would have only been good enough for 9th at best. I couldn’t go any quicker than this until my last lap as I had traffic every lap. I only just managed to get a 42.6 which even though was nearly a full second quicker than my previous best, was still half a second off pole and only good enough for 3rd.

In the first heat I missed the start by what felt like seconds This caused me to fall back 3 places into turn one. I easily got back into position though by the end of the first lap. Going onto the 6th lap, the two leaders had pulled a big gap. It was on this lap that my rear left tyre began to provide no grip under braking, turn in, through the corner or on exit. This is usually because you have a puncture so that what I thought it was. We found out after the race that it had just severely overheated and that’s why it wasn’t providing any grip, due to a high bottom end speed through the corners. We usually run that tyre at a lower pressure, but it seems we would have to go even lower. For the remaining 4 laps, I had to defend everywhere that I could and I was having really bad corners, meaning that I was also slow down the straights due to the poor exit. I was side by side with Bella over the line but I just managed to come out on top, by a tenth.

For the 2nd heat I was starting third again. This time I didn’t miss the start meaning that I stayed in 3rd. I was right on the back of 2nd position on the 5th lap, waiting for them to make a mistake. The two leaders then began to fight, allowing me to get up into 2nd. I was then right on the back of the leader. I went to the inside of the hairpin on the 6th lap. Then I ran deep, allowing them back past. This is when my rear left tyre began to overheat again but this time I couldn’t defend enough and I got re-overtaken. Even lower pressures, next time out! I couldn’t get him back meaning that I finished 3rd, where I started.

For the final, I was starting in 3rd. Position of the day it seemed. For the first 3 laps, nobody moved positions until we all began to fight. On the 4th lap, we all lead the race at least once. However, I wasn’t in first or second for very long though as on the next lap I was back down in 3rd.

On the 9th lap, 2nd place went for the lead and the hairpin. He ran deep which cost him 2 places and put him down into 3rd, myself down to 4th and the driver that was in 4th place up into 2nd. On the last lap, I was still in 4th and I needed a podium. Through the double apex left-hander, (third to last corner) I jumped to the inside. I hit the kerb, making me bounce into the other driver. They then ran wide onto the grass. We were side by side into the last corner but I, once again, just came out on top. Firm but fair.