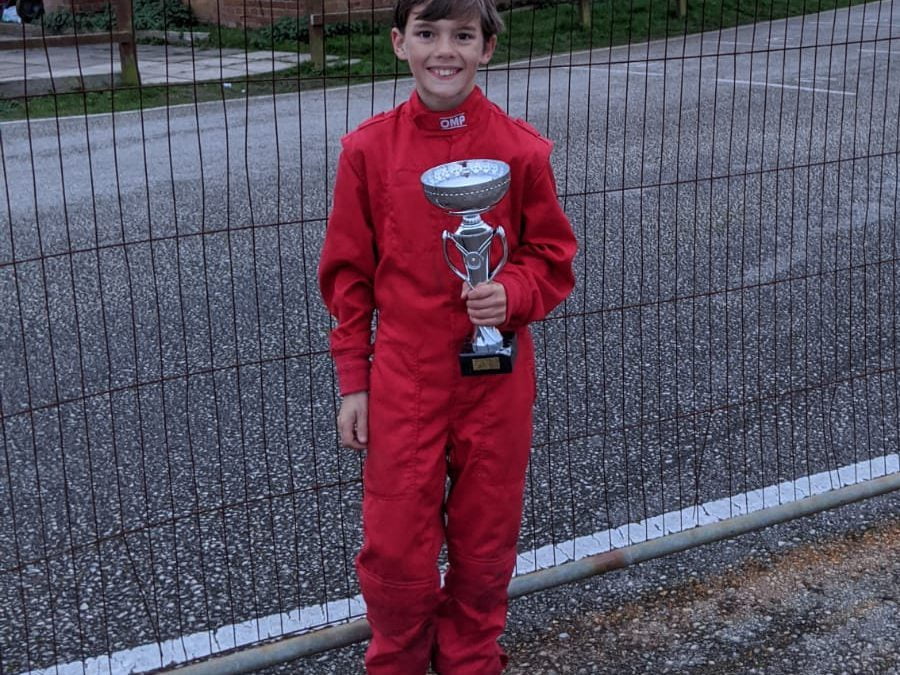 It was wet and because there was no time in the day to do a practice I was going out on a wet track that I hadn’t driven here for 6 months. So, as you probably guessed I wasn’t the quickest, in the end I qualified 6th out of 13 (3rd in class).

As it was still slightly damp I decided to hang back on the start this made me fall back to 4th but I got back up to 2nd when 1st and 2nd place crashed. I managed to move into 1st on turn 3. For the next few laps, I was defending but on the final lap, the kid in second had a better run out of the corner and got past me. As he was passing me, I got squeezed and our bumpers got stuck on each other and I fell down to 4th. After the race, we both got called over to race control to see what happened. After some talking, it was decided that he would recieve a 3 place grid penalty and I would move up to 3rd.

For heat 2 I was starting 3rd. Into turn 2 two other kids crashed off and I was now in 2nd but with a different leader from before. I was all over him but I just couldn’t get passed. Until on the second to the last lap, I dive-bombed him after the chicane. It is very hard to overtake here usually but it was the only chance in a while. Anyway, I went down the inside but, one; he didn’t see me and two; my kart understeered straight into the side of him after clipping the inside kerb. This pushed him onto the grass (he hit the tired but bounced off them and got back onto the track). In the end I finished 1st. And race control decided my move was fair.

I was starting 2nd after a 1st and 2nd in the heats, with the kid that I crashed into in heat 2 starting next to me. I couldn’t get him off the line and then it was a copy and paste of heat 2, except at one point I went down to 3rd due to backmarkers but I got him straight back into the next corner and I didn’t crash into the kid I crashed into before. After a whole day of racing I ended in 2nd, and trophy on in the last race of the Hooton Park IKR championship.