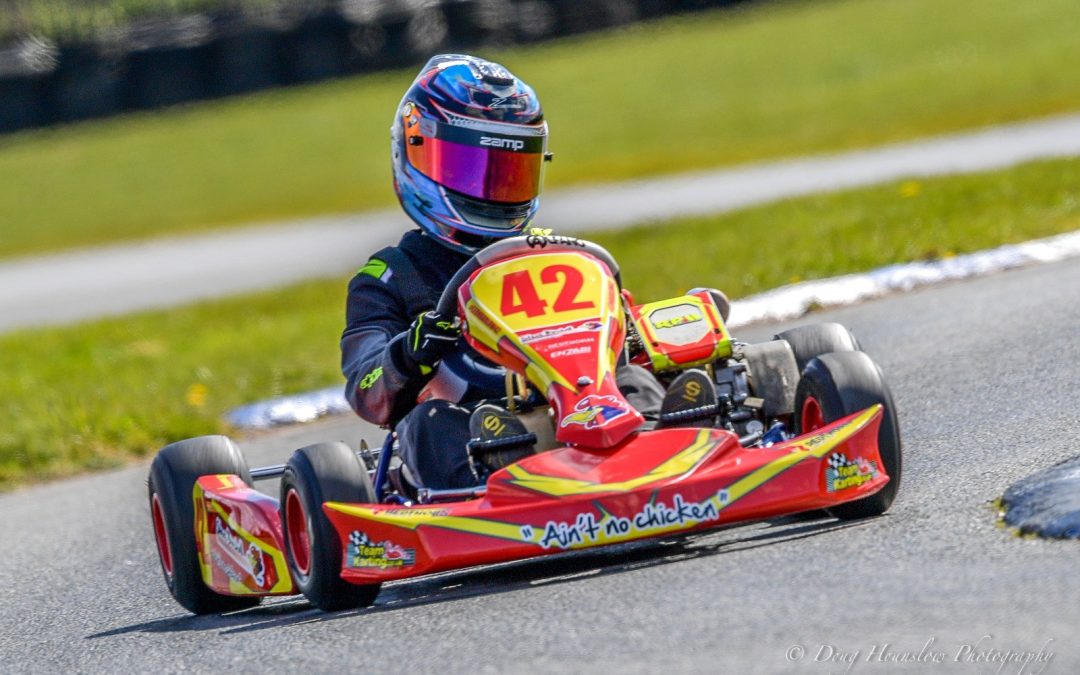 As I didn’t want to be tired for race day I tested the week before round 1 so that I had time to rest. It was forecast to be sunny and but cold all day so high tyre pressures.

For qualifying, I had to get out and set a good lap quickly as I knew that I would catch up to traffic towards the end of the session, slowing me down. I was right, as on the last few laps I caught up to backmarkers, which predictably, slowed me down. If the 6 minutes that qualifying it took me about 3 laps (2 minutes) to get up to speed. My best lap was a 41.9 which got me 2nd. I was happy about this as pole position was only 2 tenths away and had brand new tyres, which was meant to be at least 5 tenths quicker.

For heat 1 I was obviously starting 2nd and was hoping to get a good start so that I could jump the leader and get into the lead. At the start, I got alongside first place, but as they had the inside line I couldn’t get past. I held position all race with the gap to the leader staying at around 4 to 5 seconds and the gap behind staying at 2. I finished in second and was looking forward to the next race as I was setting similar times at the end of the first heat.

The second heat was very similar to the first one, however this time the gap was only 2 seconds at the middle of the race and only 1.7 at the end. I finished 2nd, which even though was the same place as the first heat and qualifying, was a massive improvement as the gap between us at the end of the race had decreased by 2.8 seconds. I had qualified 2nd place for the final getting me 9 points in the championship.

As I said, I was starting 2nd in the final. At the start, I knew that I needed to get a good start and get alongside the leader for turn 1. I managed to get alongside but I couldn’t keep my nose in around the outside, so I decided to back off and try to tighten his line and get myself a good exit.

My plan worked as I was able to keep up with him up to lap two. I only lost time as I got a lot of understeer on turn 1 of the 3rd lap, making me miss the apex and lose about 5 tenths of a second. I was already about 1 second behind so this made me fall to 1.7 seconds behind. I didn’t catch up again so I finished 2nd. The podium was finished by someone who fell down to 6th off the start but managed to work their way back up to third.