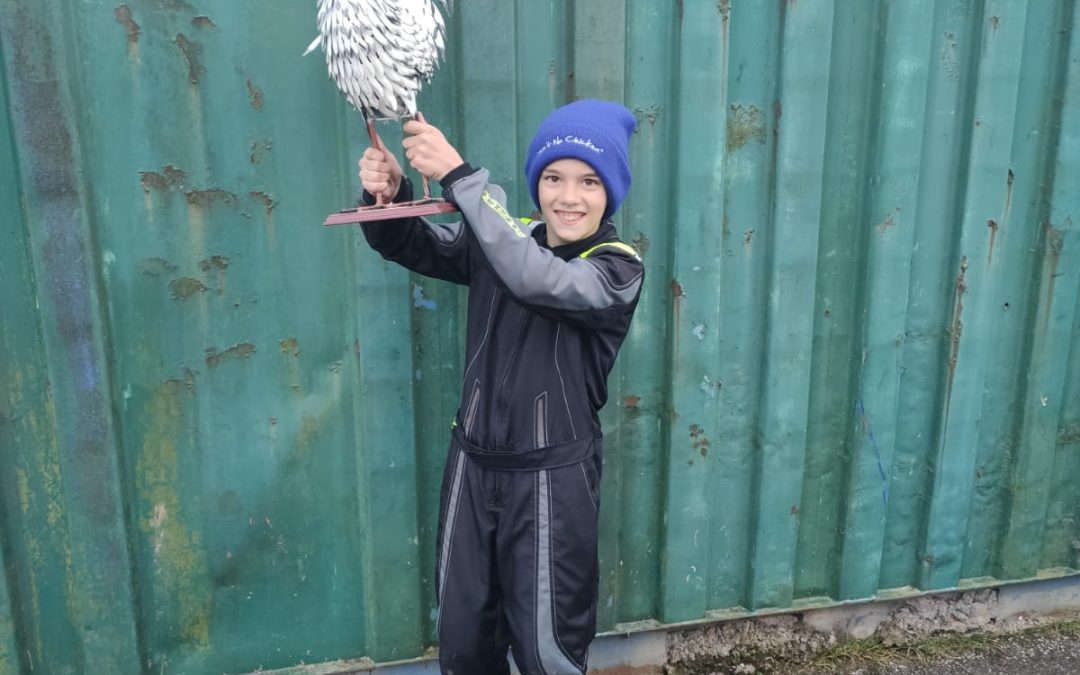 With it only being my second time here I had a lot to learn on Saturday practice. Which went ok, but I was struggling with the hairpins, and we had to get the kart setup correctly for raceday.

As the track is close in a busy town we could only start at 12 o’clock, rather than the usual 9 or 10 am. This meant there was not enough time to fit in Qualifying, 3 Heats and the Final. Due to this, we had to do random grids for the heats with no qualifying. Soo…

On the first heat, I was starting 2nd. On the first lap, I got passed and up into 1st place managing to pull a gap of 1.3 seconds. In 6 laps I was caught back up, which showed my lack of experience on this track compared to the other drivers. My leading race pace just wasn’t there. I needed to learn quick. On the 9th lap, they got passed me at one of the hairpins I was struggling with, before they pulled a small gap. I finished 2nd.

On the second heat, I was starting 3rd. On the first lap, I fell down to 5th due to cold tires (wrong pressures). However, on the 5th of 14 laps, I got back into 3rd place. Then on the 8th lap I moved up into 2nd by outbraking at the end of the long straight. Going in to the 2nd to the last lap, I was re-overtaken on fell down into 3rd, and finishing there.

For the third and final heat, I was starting 1st. On the first lap, I fell into 2nd. I stayed in position for the rest of the race, pulling a small gap to the car behind and the car in front also pulling a small gap to me. My pace was certainly improving, as I was learning how to be quicker by each passing lap.

For the final, I was starting 2nd as the driver that was starting 1st had won every heat. They were easily the quickest and most experienced driver at Wombwell. Off the start, I got up into 1st of a brief second before being re-overtaken and falling back into 2nd. For the next 4 laps, I was fighting with 3rd place, allowing the leader to pull a big, 2-second gap to 3rd place and I.

As I was fighting for position, towards the end of the 5th lap, I was overtaken! This was not in the plan. This shortly changed as on turn 2 of the next lap, they caught up to a backmarker which made them spin into the barriers (not my fault). I now had to catch up 2 seconds in 6 minutes. This was seemingly impossible unless I was at least 3 or tenths of a second quicker every lap. Thats was a big ask as I hand been that quick all weekend.

When I crossed the line on the 7th of 17 laps there were 6 minutes remaining. Believe it or not, with 2 minutes remaining on the final race, I was all over their bumper. I had been lapping a few tenths faster every lap. So as soon as I could, I went down the inside and overtook them on my favouite long straight, anchoring on from 58mph down to about 20mph. (It was quite easy as I don’t think they knew I was there).

There were 4 laps left and I had to defend my position. Every corner I was going to the inside to leave them no room to overtake me. My pace dropping, but I had to hang on! As I came around the final corner, of the final lap, of the final race, I was in the lead by less than a quarter of a second. I was ecstatic, I couldn’t believe the gap that I had closed In only 6 laps!