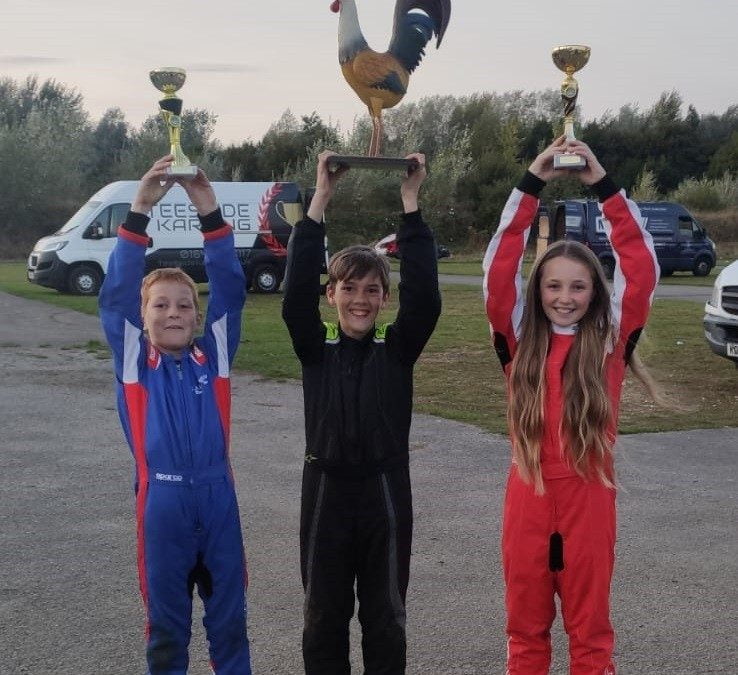 I hadn’t been to this track since last year’s Cock O’ North so I once again had a lot to learn on practice day. This was now my third time at this track and I was looking to get the 1st place cockerel trophy again.

For the first two sessions of the day, I had to remind myself of the racing lines and braking points so I was only doing mid 38’s (the lap record is a 37.6 ish). Later on in the day, after I re-learnt the track, we found a good setup that allowed me to manage multiple laps at 37.7. I was very happy with this lap as it meant that I had the pace to win tomorrow.

As the track is close in a busy town we could only start at 12 o’clock, rather than the usual 9 or 10 am. This meant there was not enough time to fit in Qualifying, 3 Heats and the Final. Due to this, we had to do random grids for the heats with no qualifying. I started one heat in the top 3rd, another heat in the middle 3rd and the final heat in the bottom 3rd. There was also no 3 lap practice on race day due to the starting time. Finally, there was also rolling starts which I hadn’t done in a honda since last year, as we usually do standing starts.

My middle pack start put me in 4th. On the first lap, I got up into P2 and was right behind the leader, who was also a contender for the win. I was pushing her in a group of three with 3rd place until the 5th lap. This is when I decided that we had pulled a big enough gap to 4th place so I went to the outside down the back straight and, with my slingshot from the slipstream, I was through before the apex of the hairpin that followed the straight. This is where I stayed until the 8th lap when second-place copied my move and put me into P2. I seemed to have lost concentration as on the next lap, the driver behind went up my inside on the double right, moving me down to P3.

The next lap was the final lap so I knew that I needed to get past and back into 2nd place. This is exactly what I did as the driver in front left the door wide open into the hairpin and I didn’t need asking twice before I sent it up the inside. I finished 2nd and was starting 1st in the next heat.

My front of the pack start put me on pole position so I knew that I needed to get away and win this race. At the start, I was easily in front and by the end of the first lap, I was 4 tenths ahead. For the next 10 laps, the gap between me and 2nd place never dropped below 0.25 seconds and 3rd place and the gap between 2nd and 3rd place never dropped below 2.5 seconds. I finished 1st with one of the other competitors for the lead nearly 5 seconds behind me. I was starting last in the next race and I needed to finish at least 3rd to get a final starting position of 2nd.

The leader was now over a second in front so me and my rival started to work together to close the gap. This worked as with just 5 laps to go we were right on his bumper. Around the last corner on the 6th lap, my rival went to the leader’s inside and got into the lead. I decided not to try to follow her through as I knew that it would be a risky overtake. This thinking paid off, however, as in the first turn on the next lap, 2nd place outbraked himself, rear-ending the leader and spinning them both out. If I won I would start on pole for the final. I finished 1st with over a 1-second gap to the kart behind. I also managed the fastest lap.

I was starting on pole for the final with one of my rivals right alongside. Off the start, the driver in second went before the lights went out (which you can’t do on a rolling start) and got in front of me. This didn’t matter, though, as he understeered off of the track in turn 1. I was now in first position and needed to getaway. Sadly, I couldn’t pull away as the drivers in second and third had my slipstream (which was really powerful for at this track because of the long straight. It could be worth up to 2 mph). Due to this, I began to go defensive on lap 7/14. I stayed defensive everywhere that I needed to until I saw the last lap board.

On the final lap, I went ultra-defensive everywhere that I could, in order to keep my lead of the race. Coming around the final corner there was less than half a second in the top 3 and I was in front.

It’s been a while… But finally a 1st place!

Well done to everyone this weekend, it was a very close final. This was also my second-to-last race in my cadet so it was nicer than ever to win. Now onto Clay Pigeon for the final of Cadet Kart Championship.