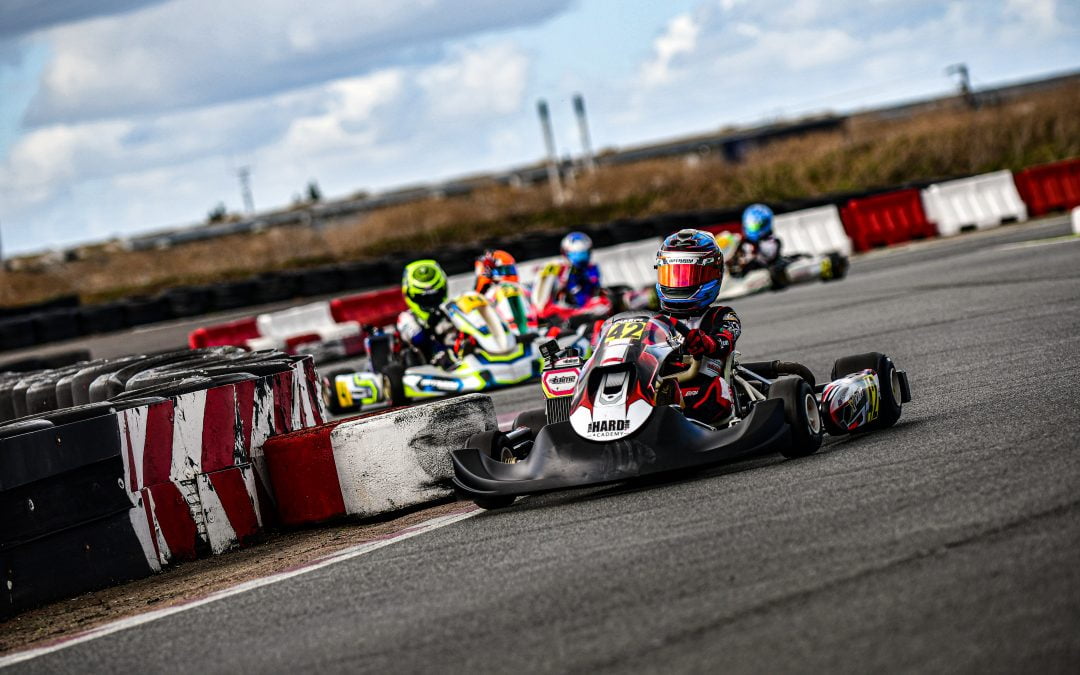 Going into this weekend we realised that I was just 7 points behind 3rd place in the standings. The aim of this weekend was to beat them in every race so I could finish 3rd place in the championship. As per usual in CKC, there were 3 heats and a final on Sunday. Each heat was to be set by a random grid. In the heats, I was starting in 4th, 8th, and 3rd, in that order.

I was quick right from the start on Saturday. In the first session, I was getting used to the track so the pace wasn’t very good. However, in the 2nd and 3rd sessions, I was one of the quickest on track after I had learnt it. In the first three sessions, my best lap time was a 44.8 but we knew that there was still a lot more pace to find. During the lunch break, I looked at my camera footage and found where I could find some more time. As soon as my tyres were warm in session 4, I beat my PB by over 2 tenths. My PB kept coming down until the end of the day when my PB was a 44.5. There was still more pace to find on new tyres but this was a good starting point.

As the lights went out I immediately went to the inside and got up into p3 from 4th place on the grid. On the exit of turn 1, I tried to gain another place but I didn’t have the run out of turn 1 so I had to stay behind. I tried to get the overtake again into the hairpin but I wasn’t close enough so I had to stay behind even longer. I had a really bad run into the penultimate corner so the driver behind went for the overtake. Being overtaken put me on the dirty part of the track, so I ran wide and lost another place. Into the final corner, however, I sent it up the inside of the driver ahead. The overtake worked, which was important because I had to beat them in every race to get 3rd place in the championship. By the end of the first lap, I had gained one place and lost another so I was still in 4th.

At the end of lap 2, the driver behind repeated the overtake on me into the penultimate corner, only this time I didn’t run wide and I only lost one place. On lap 4 I finally got past the driver I couldn’t before with an overtake into the hairpin to turn 3. I was not up into 4th place, this didn’t last very long though, as my championship rival got a better tun at the hairpin a pulled alongside into the following corner.

With just over 3 minutes to go, I made the place back with an overtake into the hairpin. I made sure to prevent the switch back, and I was up into 4th place for the final time in this heat. I crossed over the finish line with just over 4 tenths to my championship rival behind. After the race they got a drop-down penalty, demoting them down to 8th and closing the gap in the championship from 7 points down to just 3 points.

In the second heat, I was starting in p8 for my back start. On the outlap the driver in front brake checked me, giving me a drop-down before the race even started. With this in mind, I was just going to send it at every opportunity. Into turn 1, I sent it around the outside on entry, gaining me one place straight away. On the exit, I came to the inside to try to get another place. My championship rival ahead got squeezed out on the exit, slowing them and another driver down a gaining me 2 more places. Into turn 2, my teammate ahead went for an overtake around the outside, this didn’t work so I placed my kart right on the apex and got another overtake. I was now up into p4 and was right on the back to the top 3 in front of me.

I stayed in 4th place up until the final lap of the race, slowly catching up and then losing time to the karts ahead. Onto the final lap, the leader went very defensive. This closed my gap down to the top 3 overtaking distance. Into turn 2, the driver in 3rd went down the inside of the driver in 2nd. I knew that a gap would open up one exit so I took a different racing line to maximise my exit speed. Through the second part of turn 2, I took a little extra kerb and got up into p3. Into the next corner, I noticed that I had a really good run on the next driver ahead so I sent it up the inside on the brakes and got up into p2.

I crossed the line in p2 but with my penalty applied, I was classified in p6. My rival was in p4 so I lost 2 points to them. The gap was now 5 points so I had to maximise the points that I get out of the next two races.

In the final heat of the day, I was starting in 3rd place. I was alongside my rival so I had to finish in front of them. The driver on pole was the driver that won the previous heat, so I knew that if I stuck with him I had a shot at a top 2. The pole sitter had a really bad start so before I even got to turn 1, I was already in p2. Through the first corner, the driver in first completely missed the apex, which gave me a shot at the lead. I took this opportunity and by the exit of turn 1, I was already in the lead. By the end of the first lap, the driver in 2nd and I broke away from the pack a little but we both knew that the top 2 in the championship wouldn’t take very long to come through the pack.

By the end of lap 6, one of the two championship leaders was right on the leading pack’s tail. It took until midway through lap 9 for them to make any progress on making their way through the pack, and by the time they had done this, the other championship leader was right with the pack. I was now leading a pack of 4 other drivers which included the two championship leaders, my rival and the driver that looked on pace to win this round. So it was going to be very difficult to keep them behind in the remaining 1:30 of the race. Luckily for me, I didn’t have to defend that hard over the remaining laps, as the pack behind began to fight each other.

I finished this heat in first, which really helped my championship as my rival finished in 5th on track but after penalties, he was classified in 8th place. With a heat win, I got 35 points and with a p8 my rival only got 26 points. I was now 4 points ahead of them in the standings so all I had to do was finish at least 1 place ahead of them in the final.

With a 4th, a 6th and a 3rd I was starting 4th in the final with 93 points to my name. My rival was starting in 6th with just 82 points. This meant I gained 11 points over him before the final even started, and I was (as I said before) 4 points ahead in the championship. As the lights went out I had a very good reaction, however as I was on the outside, I couldn’t come to the inside to make anything of it. I stayed around the outside of turn 1 and just managed to stay in 4th into turn 2. Unbeknownst to me, my rival went straight on at turn 1 and was now in last place, almost 5 seconds off the pack.

For almost the entire rest of the race, I stayed in 4th place. I kept slowly losing time to the pack in front, but then gaining back the time I lost every time they fought with each other. Over these laps, my rival only gained back one place as he was just too far back to the mid-pack. Onto the final lap of the season, the race leader began to defend. Hard. The near two-second gap between 3rd place and I was gone within a matter of not even three corners. I was now right on their tales and into the third-to-last corner, the two championship leaders collided, giving them both drop-downs. Into the second-to-last corner, the driver in third went for a move on 2nd place. I went really wide on entry, as to get a good run out of the corner. I was now within overtaking distance so I sent it up the inside and got up into 3rd place, at the last corner of the season.