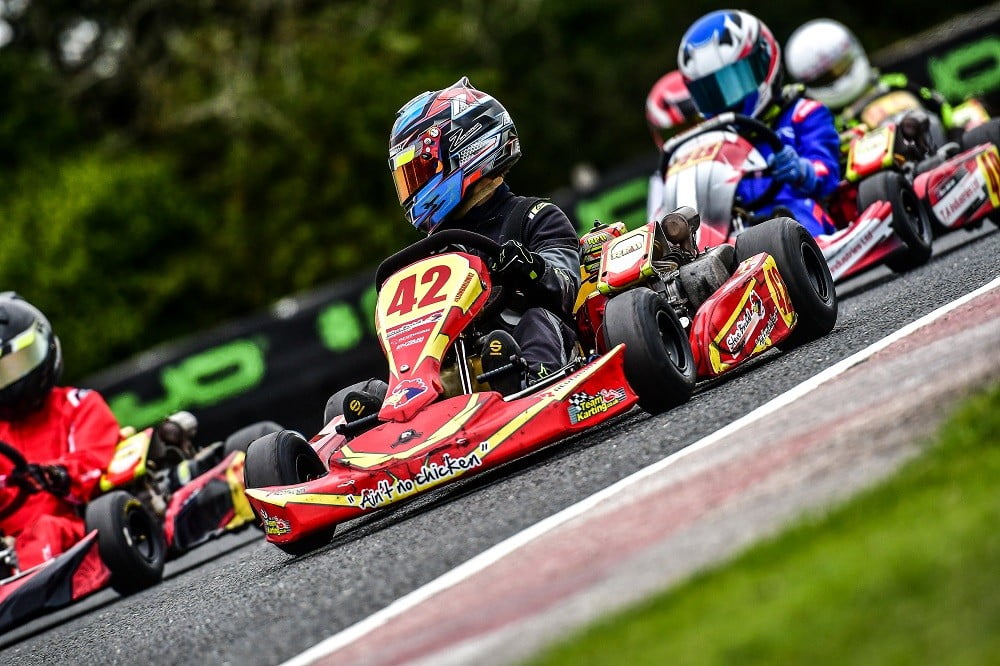 On Friday I had really good pace but as I got later on into the day my tyres, which had a lot of wear on them, began to limit me from going any quicker. So we decided to put on our race tyres for the last session to see how good my pace really was. I went out on track and was immediately one of the quickest drivers on track. I now knew that I had good pace so we decided to use my bad tyres on Saturday practice, and in the session before qualifying to put on my race tyres to double-check that I was back on pace for qualifying and the races the following day.

On Saturday we did as we had planned. Slowly doing laps around the track to find good overtaking opportunities for Sunday. As it got later on in the day my tyres began to get even worse and got to the point where I was almost 2 full seconds of the quickest drivers on the track. However, as we planned, I kept these tyres on until the session before qualifying and, once again we put on the race tyres and I was the quickest driver on the track (from those who had their transponder running anyway).

Throughout the day, the wind had slowly picked up and by the time qualifying came, it was very windy. This meant that the slipstream was very powerful and to get a very good lap you needed to be in a drivers tow.

At the start of qualifying, I knew that I had the pace for pole position in my last cadet race so anything other than the front row would be quite disappointing. I managed to get out behind the championship leader and I knew that if I could go quicker than him I would be on pole. For the first few laps, I was struggling to keep up but as my tyres began to warm up I got closer and closer until I was right on his bumper. As soon I was in his slipstream I got a 39.9. This would be my quickest lap of qualifying and would also be the quickest lap out of everyone, meaning, I was on pole. I really wanted the win in my final cadet race so I was going to push as hard as possible on race day.

Pole position was on the outside at this track so the driver that qualified on pole was at a disadvantage to the driver that qualified 2nd. Due to this, I was in 2nd place for turn 1. I couldn’t manage to get past the leader which allowed the drivers in 3rd and 4th to go up my inside into turn 2 (the first corner that we need to slow down for). After this, I was in 4th and had a lot to do to get back into the lead.

I had slowly fallen away from 3rd place until lap 8/13 my tyres finally came on. I was gaining, quick. Going onto the 9th lap, I got in the slipstream of the kart in front and got fully alongside for turn 2. I was back into 3rd place. On the laps before lap 11, I still had a lot of pace but I couldn’t use it because of the backmarkers that we had caught up to. However, on lap 11, I got a good run out of the chicane (turn 3 and 4) and managed to send it up the inside of the driver in 2nd into the hairpin. I was now in 2nd and was right on the rear of the leader. On the following lap, I managed a good exit from turn 2 and managed to get up the inside of the chicane and into the lead.

This is where I finished but was once again, on the outside for turn 1. Maybe I should have settled for 2nd, but needed the championship points.

Before the 2nd heat, it began to rain but stopped when we were on the grid. So nobody knew what tyres it would be; slicks or wets? The majority went on dry tyres so that’s what we did. We had gambled before, at Fulbeck and that really didn’t go to plan!

Once again, I lost the lead into turn one as pole position is on the outside. However, the new leader had driven here before in the wet so I couldn’t keep up. On the next lap, the driver in 3rd place got up my inside into turn 2, putting me down into 3rd place. This is where I finished. It was quite a lonely race as I finished nearly 1 second behind 2nd and over 1 second ahead of 4th place.

It had once again rained before the 3rd heat but this time it was definitely wet tyre worthy. This meant exteme setup changes. And as we had done no wet testing at this track, we were guessing. At the start, I couldn’t find any traction so I fell down to 5th place. Going into turn 1, I realised that I had a lot less grip than the drivers around me and that I didn’t have a good setup whatsoever. As soon as I realised this I went into damage limitation mode, I needed to try to lose as few places as possible.

I stayed in 5th until lap 5 when a 112 (they have an slight advantage in the wet due to the extra weight) out-drove me out of one of the hairpins, putting me into 6th. The driver in 7th then followed him through. Putting me into 7th. For the next few laps, I was right on the bumper of the kart in front until I tried an overtake up the inside of the second hairpin. This move didn’t pay off, however, so I fell to 6 tenths behind. Going onto the final lap, I was back on the rear bumper of 6th place and I knew that I needed to get by. Later that lap, at the second hairpin, I put my front bumper up the inside but this time I managed to secure the move and to move up into P6.

I knew that we needed to sort out the setup or I wouldn’t even have a chance for a podium, never mind the win.

The Final Race of Cadets

I was starting 3rd in the final so was hoping to at least hold position. I had a really good start and got into 2nd place for turn 2. I thought that we had found a good setup but after the first lap, I realised that it wasn’t much better than the 3rd heat’s setup. On the second lap, I got sent into the last corner and I fell down to 3rd. On lap 3, another driver copy-pasted the same overtake that happened to me the previous lap. I was now in 4th place and off the podium. On lap 4, I outbroke myself at the first hairpin, allowing the driver that started 2nd (who was also 1 place behind me in the championship standings) to get past. I stayed in 5th place until the end which secured me 5th in the championship.

It was admittedly a bit of a disappointing final race day in cadets but at least I got pole position and I like to think I would most likely would have won if the rain hadn’t of come!

Thanks to all of my family and sponsors, Redthorn, Enzari and Ste Birchall Poultry Services for supporting me this season. Plus well done to the other drivers this season, especially Riley, Jared, Tom, Harris, Ben and Melissa .

Now on to the next season in X-Kart Mini Max!