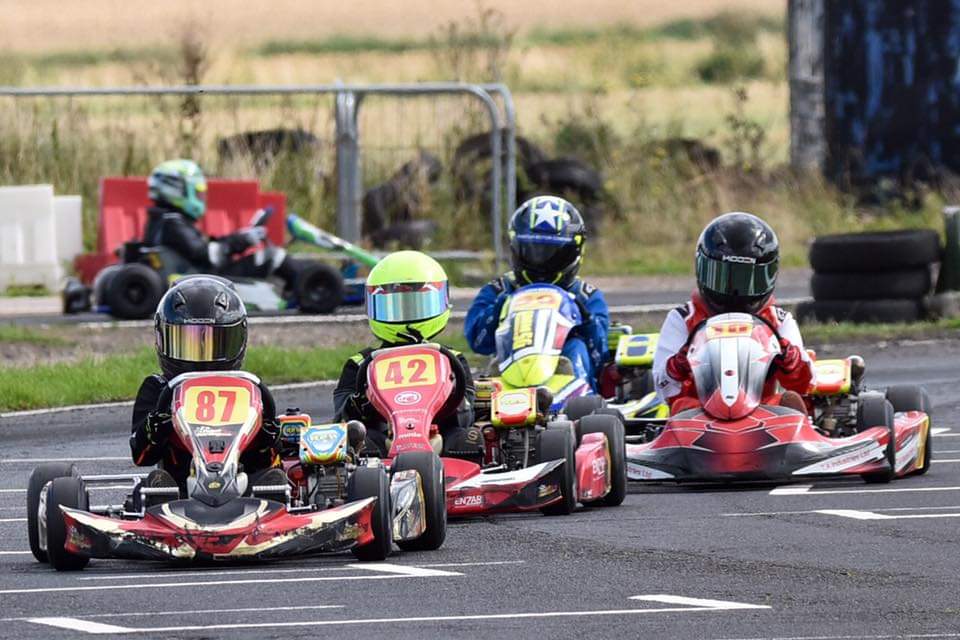 For the 6th round of CKC, we were, once again, at a new track but this time it was Fulbeck. Jukes and Murphy and a few others had been to this track in the past but many of us hadn’t. Including me.

In Saturday practice I was, surprisingly, not miles away from the fastest drivers. At the start of the day, when I started in the middle of the grid, I was around 8th or 9th fastest. However, towards the end of the day, when I was starting at the front, I think i was around 3rd or 4th fastest and really starting to understand the track.

In qualifying, I went on track in the middle as I got to the grid a bit late. I put a decent lap in once my tyres warmed up, but then for the rest of qualifying, I was stuck in traffic, until, I backed out at gave myself a few seconds to the kart in front with a couple of laps left. I was on a fast lap, and was half a second up on my previous best time according to my delta, but the session got red flagged*. In the end, I only got a 52:70 which was only good enough for 8th place.

*Red Flagged – The race has been stopped, usually because a car is lying in a dangerous position after an accident or because conditions are too poor for racing to be safe.

Starting in 8th place, I was aiming to finish at least 5th or 6th. Off the start, I didn’t gain any places. Into turn 1 I went around the outside of the kart in front and got up into 7th. Later on in the same lap and going onto the next, I went around the outside, which turned into the inside as it was a chicane. (as you can probably tell, I like overtaking around the outside.) However, on the 3rd lap, I got re-overtaken and fell back into 7th. For the rest of the race, I stayed in position and was beginning to think that I would finish 7th. UNTIL, going into the last few corners I sent It up the inside of the kart in front which got me into 6th, and then, the kart that was in 5th got squeezed wide which allowed me to sneak up the inside and subsequently, into 5th place.

Starting 5th I was aiming to finish at least 4th. Off the line and going into turn 1 I got up into 3rd and managed to hold it around the outside to get into 2nd but later on in the race, I fell back into 3rd. On the 9th lap of 10 laps, the kart behind sent it down the inside. However, because it was the second last lap, and wanted to hold a position, I kept my nose in. This caused me and the other kart to both hit the tires and we both span. The kart that was in 6th then got past us both and I went into 6th where I finished.

In the 3rd heat, I was starting 6th. Off the start, I gained a place but as we finished the first half of the lap there was a red flag. We re-gridded and then there was a 20-25 minute break while they ensured the driver was ok. He was.

On the second start, I gained 1 place which put me in 5th. On the 3rd lap, I got up into 4th by passing the kart in front along the straight, as they had a bad exit from the previous corner. I stayed in 4th until the last lap when they got me into turn 1. Luckily, going into the last breaking zone I went up the inside and got back into 4th.

In the final, I was starting 4th. Off the start, I didn’t gain or lose and places but, into turn one, the kart behind went down my inside but unluckily for me, they squeezed me onto the grass on the exit, slowing me down. I was all over them until, last minute, on the 5th lap, I threw my kart down the inside and because they didn’t expect it, they closed the door, hitting me and sending themselves wide. After I got past them, I was about 2 tenths quicker per lap. This caused me to slowly get away from them over the next 5 laps. I was about 1.5 seconds away from the 3 leaders going onto the last 3 laps. Luckily, they all got stuck behind backmarkers which helped me catch up to them. On the last lap, I was around 3 tenths away from a podium. However, I made a mistake into turn 1 dropping me to about 6 tenths behind. As I wasn’t a lot quicker than them I couldn’t manage to catch up in time. I think that if I had 1 more lap I would have gained my first CKC podium.

I was quite happy with my result, as my PB finish before this weekend was only 7th place. Sooo…

ONTO THE NEXT ONE…