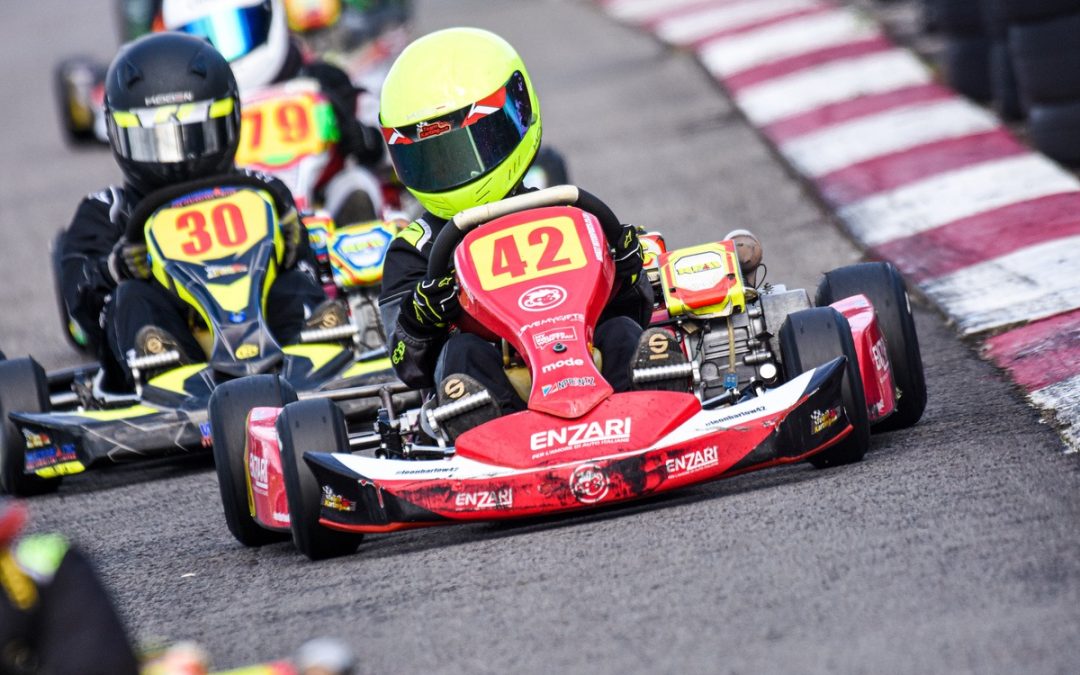 CKC is back with Llandow and once again a track that I have never been to before. The track was open on Friday, therefore, a few people had a head start on Sunday, nevertheless, it was only a day’s more experience and I still had the Saturday to learn the track.

On Saturday we had 7 sessions to set up the kart and get up to pace, which was more difficult than it seamed seeing as I was about half a second off the drivers that I usually race against and with. This was quite worrying but as always, I hoped that it was my tyres and that I could pull something out of the bag on Sunday.

On Sunday practice it was still a bit damp, but luckily for qualifying, it had completely dried up. Looking at Saturday we were wanting around mid 51’s. I went out and noticed that the kart felt really stiff*and was quite hard to drive. For the first few laps I was, as always, stuck in traffic, only managing a 51.81. When I finally got past the traffic on the 6th lap my tyres had overheated and I only managed to match my previous best of a 51.81. With a 2 tenth gap to 7th place and a half a second gap to 6th it was looking to be a lonely Heat 1.

As I was revving up the engine for the start I saw smoke coming out of the engine, I thought that this would be a problem but luckily it was just because the clutch was getting too hot so I let off the gas the smoke went.

Off the start, I gained a place and was on the back of the two drivers ahead. At this point, I was beginning to think that my quali pace was a lie. Going onto the second lap, the two drivers ahead tangled and locked wheels this allowed me to get through. (When they locked wheels I was getting ready to move out of the way because I half expected one of them to flip (sorry Ethan)). But mid-way through the third lap, I left the door open and they both got through over the next few laps they started to get away as, once again, my tyre pressure was too high and they were overheating. I thought that I was on my own until on the 7th of 10 laps I realised that the driver behind was gaining on me. Over the next 3 laps, he was gaining and gaining until going onto the final he was right on my rear bumper. I knew that I had some defending to do and so I did. As I knew it was difficult to overtake on the first two sectors I only defended the hairpins. On the final time on the final straight I immediately moved to the inside this left him nowhere to go other than the outside coming into the last corner I stopped on the apex so that he got slowed down. Over the line, we were split by less than a tenth of a second but I was ahead.

I was starting 7th for the second heat. This race I had an even better start but I didn’t manage to gain any places as everyone else around me had a good start as well. Most of the race I was stuck behind 6th place up until lap 7 when they retired with a problem after taking too much kerb. This left me in 6th but under pressure from the karts behind. We were fighting lap after lap, switching places what felt like every corner, up until lap 9 when they got past for good. Finishing 7th, hoping to gain some places in the third heat.

Coming out of the pits the kart behind went straight into the back of me and spun me around. I was quite upset about this because I knew that I had to start from the back of the grid. Looking back I now think that I should have braced myself because as it was the outlap nobody expected somebody to be backwards, anyway. Another kid came into the front of me at 30mph bending the bar that keeps my front bumper on, my brake pedal, and my toes, fracturing I didn’t know at the time. I was in so much pain and couldn’t walk. Obviously, I couldn’t compete in the 3rd Heat.

Starting 13th I had some catching up to do. Off the start, I gained 2 places and one around the outside into turn 1. I was now in 10th and on the back of ninth, at the end of the long straight going onto the next lap, I tried a late lunge down the inside but, as I said before, I had a fractured foot so I couldn’t slow down quick enough, letting her beck through. On the next lap, I tried the same thing again, this time breaking a bit earlier and completing the pass. Sadly, during this fight 1st to 7th had got out of reach. I couldn’t catch them up quick enough, as I was 5 tents slower over a lap because I didn’t have enough stopping power so I couldn’t catch up. Finishing 8th I was quite happy with myself, especially considering that I didn’t even think that I was going to start the race. Onto the next race…

Thanks to my teammate’s dads for sorting out the mess of my kart for the final. 🙂 🙂

Thanks to Josh Easy Photography for taking these amazing pictures. https://josheast.photodeck.com/-/galleries/nkc-llandow/ckc-cadets