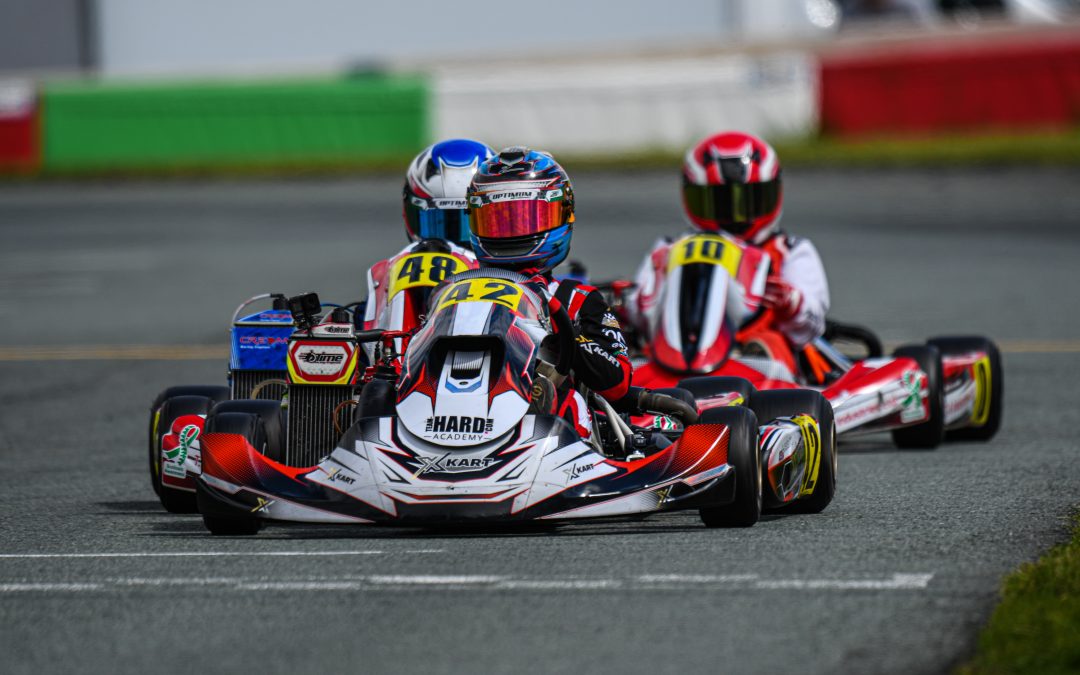 This was to be my first round of CKC on my new chassis, and after the success of WMKC, expectations were high. Last year, in cadets, I struggled at this track so I didn’t like the track, however, it began to grow on me this weekend. On Friday I had quite young tires but I had to use these for both Friday and Saturday so by the end of practice they would be dead. Knowing this, I was prepared for my pace to drastically fall off on Saturday.

At the start of the day, I was one of the quickest drivers on track. I was even quicker than the drivers that had been here in Mini Max in the past. As the day went by, I only got quicker. By the 4th session, my best lap time was a 44.02. This was one on pace with the quickest driver and about 8 tenths quicker than the 3rd quickest on track. In the last two sessions, I could only manage a 44.29 and a 44.31 respectively. By now the other drivers had got their PB down to about a 44.6 but I was still a lot quicker.

On Saturday it was obvious that my tires were showing their age. Throughout the day, the other drivers were getting quicker and quicker while the best lap that I was able to set was a 44.22, while my average lap time was about a 44.4. The quickest lap time of the day was a 43.7 set by the quickest driver of the championship so far. (They aren’t the championship leader because of a couple of mechanical DSQs.)

In the first heat, I was starting 8th for my middle-of-grid start. On the formation lap, the driver that was starting 2nd spun out, causing us to have multiple false starts. When we finally got going, I held it out around the outside of turn 1, which gained me a few places and moved me up into 5th. On the outside, I got squeezed onto the grass but I managed to keep 2 tires on the track and I only got a bad run up the hill. I stayed in 5th for lap 2 but on lap 3 I got a bad run out of turn 1, allowing the driver behind to pull alongside for the flat-out right-hander of turn 2.

There was loads of action in front of me all the way through the rest of the race (it will be on the CKC youtube channel, a great race to watch), however, I couldn’t make anything of it as I stayed in 6th until the final lap. On the final lap, the driver in 5th got an awful run out of turn 1, making it very easy to overtake down the straight. With a good defense for the rest of the lap, I managed to cross the line in 5th place. My best lap of the race was a 43.69, my PB of the weekend.

In heat 2, I was starting on pole position for my front-of-grid start. At the start, I got the power down early but my kart didn’t accelerate. Due to this, I was down to 2nd on the run up to the first braking point of turn 3. Luckily for me, the leader missed their braking point so I was able to sneak past and get back into the lead for the next corner. On lap 2, I got a really bad run out of turn 1, allowing the driver in 2nd to pull alongside and to get in front for the exit of turn 3.

I was matching the pace of the leader until lap 7. At the end of this lap, the driver behind made a move into the devil’s elbow. As he overtook me, my front bumper and his rear bumper got caught on each other, almost putting me on the grass. This gave me a really bad run, which let the driver behind catch up and overtake me into the final corner. As he went a bit deep, I managed to switch him back and re-overtake him into turn 1. Being in front didn’t last very long though because I got overtaken on the breaks into turn 3.

For the rest of the race, I was quicker than the driver ahead but I couldn’t make an overtake happen. I finished 4th on track but was classified in 3rd after the winner was given a penalty for ‘gaining an advantage through contact’.

In the third heat, I was starting in last place, for my back-of-grid start. Out of turn one on the first lap, the driver in front got a really bad run. This gave me the chance to overtake them up the hill and so I did. On the brakes into turn 3, I overtook another driver but on the exit I got break checked which gave me a drop-down and allowed the driver I just overtook to pull back alongside. I successfully defended from them but I still had my drop down. Later on in the lap, I stuck it on the inside into the devil’s elbow and got up into p10.

On lap 2, the driver behind overtook me but I also overtook a different driver so I stayed in p10. I struggled to make the tires work until lap 7 when I found a lot of pace. On this lap, I overtook two drivers, one got a bad run out of turn 1 so I was able to overtake up the hill. The other overtake was set up by the driver ahead getting a bad run out of turn 3 so I got past into the carrousel. On lap 8, another driver got a bad exit out of turn 3 (who I overtook) so I was now up into p7. I stayed in p7 until the final corner where I got taken out by the driver behind. I fell all the way down to last so this race was a right off.

With two good finishes and a last, I was starting in 5th for my final. We had gone very low on the tire pressures for this race as it would be longer. At the start, I immediately noticed that my tires were nowhere near the optimum heat and pressure. By the end of the first lap, I was already 8 tenths off of the next kart in front of me and 1.5 seconds off of the leader.

Up until lap 8, I was only losing time to the leaders. The gap was now up the 3.1 seconds and now that I lost the tow I was only going to fall away more. For the rest of the race, I was working with the driver behind of Ben Adrian to try to catch back up but with how close the field spread was there was no chance of catching back up. I finished in 5th place, which even though it was quite disappointing considering my pace at the start of the weekend, this result was a lot better than my previous 4 rounds’ results.

(Matty Street here’s your shoutout that you asked for 😊)