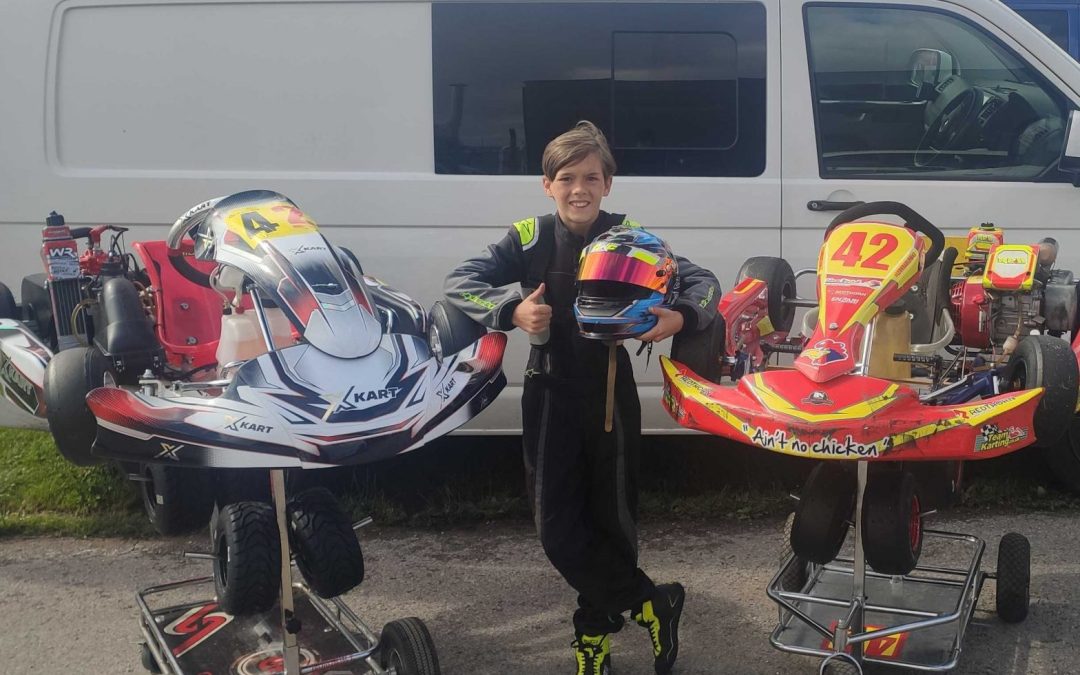 For this weekend I was driving two separate karts in two separate races. My Honda cadet 200 and we tested Rotax Micro Max on an XKart chassis. I was slightly concerned on how driving the 2-stroke would affect my main Honda championship. We needed a non-issue weekend!

On Sunday morning, for the qualifying session I wanted as far up the grid as possible, but as we got to the dummy grid later than other people I could only get to the middle of the grid. When I went out it took me a couple of laps to get back used to my kart as the last thing that I drove was the Micro Max in practice (this would reoccur for the rest of the day as I jumped between karts, as I expected).

For the first half of the session, it got a tow from another driver and pushed her along. I could only manage a 41.7 and I knew that this wouldn’t be good enough. So for the latter half of the session, I overtook and began to set laps on my own. The best that I could manage was a 41.10 which was good enough for P2 and also good enough to beat my personal best lap time which was previously only a 41.22. I was very happy with this obvioulsy.

For the Micro Max, I went out at the front of the grid and my best lap was a 39.909 which was also good enough for P2 as the driver that got on pole got a 39.893. I was just 0.016 seconds from getting on pole for my first race in this kart. Not a bad start, but I was confident I could go faster. The kart balance was slighty out so some setup changes where required for the heats.

Due to the number of cadets, the grid was spit into two groups. Odds and evens, based on qualifying results. This meant I was starting on pole for my race. Off the start, the kart didn’t pull. I either got my revs wrong, or the clutch needed looking at. Luckily 3rd place pushed me away from 2nd and allowed me to stay in 1st after lap 1. Going into lap 2 there was a red flag, pausing the race as there had been a crash needing an ambulance. (The driver was okay and was released from the hospital later on in the day.)

In scrutineering, after qualifying, the driver that got on pole had been disqualified after being underweight. This placed him at the back of the grid and put me on pole for my first rolling start in a 2-stroke. I had’nt done a rolling start for about two year. And being on pole meant I had to control the pace over the start line. I had a good start and I pulled away for turn 1 the gap was growing until on lap 3 there was another red flag. This time the drivers involved didn’t need an ambulance so the race resumed after they fixed the tyre wall. The race was resumed with another rolling start and the distance of the race was reduced from 7 minutes to 5 plus a lap. I once again had a good start and I began to pull away. At the end of the race, I was about 4 seconds ahead equivalent to about 20 kart lengths. I was more than happy with my performance and the XKart was now handling really well. The amount of grip compared to my usual kart was unreal.

The long delay after the red flag on heat 1 meant that we were starting again. So yet again started from pole. I had a good start and stayed in 1st place over the until the second lap where the 3rd place starter went to my inside on turn 1. This then slowed me down for turn 2, allowing another driver to get passed. After being passed on turn 2, I had a then had a bad run down to the hairpin (turn 3) and was overtaken before the braking zone slamming me down to P4! Not good. Fortunatley, 2nd place runner then ran wide at the double left, slowing them down and putting them into 6th. The same thing happened on the next lap with a different driver, putting me up to 3rd place.

For the next 5 laps I was fighting with 2nd place runner but every time I got alongside he would either squeeze me onto the grass or push me wide through a corner, slowing me down. However, going onto the second to last lap I managed to get fully alongside into turn 1 and I squeezed him right out wide on exit as he had been doing to be for the 5 previous laps. He was also overtaken by somebody else as I slowed him down. He eventually finished over 1.5 seconds behind me, showing how much he was slowing me down. Finishing 2nd was a relief after such a touch race.