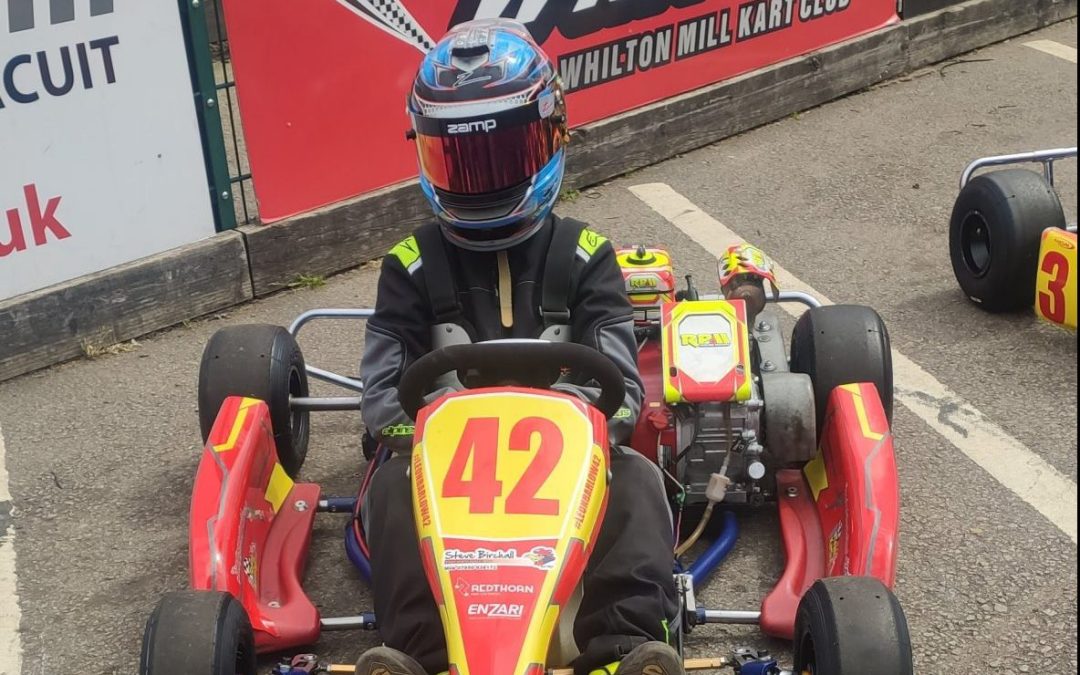 Finally, the start of my national championship. Visiting 7 tracks around country. (It was meant to be 8, but 1st was cancelled due to covid) As it was only my second time here, I was wanting some extra practice to try to help me on race day. This is why I went on Thursday and drove on Friday, Saturday and Sunday. On Friday the best time that I managed was a 52.1, better than last years 52.6 but as the previous years best race lap was a 51.8, I had some time to find, if i was to be in contention for a podium on Sunday. I still had Saturday practice to push and improve though.

Once the actual race weekend started, more and more people began to arrive. There were 42 drivers expected to turn up for cadets so the grid had to be split up into two groups of 21. The reds and the blues. For Saturday I was in the reds however, this could change for race day depending on where I qualified. Odds would be in one race day group and evens would be in another. I manage to improve and eventually hit my PB of 51.8. I just needed to carry this through to the drives that mattered.

Qualifying was on Saturday evening so that we could get 3 heats and a final in on race day. In qualifying, the best lap that I could manage was a 52.0 which I was very happy with good enough for 3rd in reds and also 3rd overall. However, 1st place was 2 tenths away from my best time so I had some time to find, if i was to be competing throughout the day on Sunday.

For heat 1, I was starting 2nd in the red group as all of the times from both red and blue qualifying were put together. 1st, 3rd, 5th, 7th etc went to red races and 2nd, 4th, 6th, 8th etc went to blue races. After the out-lap everyone other than 1st and 2nd were in the wrong places due to 3rd place dropping out because of sickness. This confused the pack. So it took 7 minutes (nearly the time of a full race) to sort it out. After they were all sorted out, they used the wrong start lights for the start of the race and both the first and second rows didn’t see them go out. This caused me to fall down to about 12th, but i managed to get back some places back quickly. I still had a lot to do to get back up into position, I couldn’t do so as my kart was running terrible. Something was wrong as we had only swapped race running gear (sprocket, chain and clutch). Every lap was a second slower than my practice pace. So after a hectic start, I could only finish 6th.

There was a one hour delay to the 2nd heat as there was a red flag during the race before ours. (Nobody was hurt). I was starting 6th and had some work to do. In the break we swapped a bent stub axle, which slowed me in heat one. Off the line I was immediately up into 4th. For the next few laps I was pushing, trying to keep up with the top 3. On lap 6 I was overtaken but as I was squeezed off track I fell down to 6th. On the last few corners of the last lap, I managed to get passed and up into 5th. This was probably one of my best overtakes I’ve ever done as it was made on a narrow and windy part of the track. The kart still didnt feel right even after swapping a couple of parts, and slightly adjusted the setup. I managed to improve my times, but still I needed to find more pace.

There was no heat three as after my second heat there was a 55mph crash in the junior which caused another big delay. The driver involved had whiplash and a concussion but other than that he was okay.

I was starting 5th for the final race of CKC round 1. We swapped the clutch back to the practice clutch. Off the line, I got up into 4th and nearly 3rd but I had to back out as I would have collided. The provisional podium was pushing each other to try to pull a gap to me and 5th place. They did pull a gap as I fighting with 5th place but I managed to stay in front and pull a small gap myself. As I then had clean air, and my pace was on par with the front 3 but the gap was to large to make up. So not much happened until the last set of corners where I had a great view of 3rd place up into the lead with the best switchback and double overtake that I’ve ever seen. Well done Riley.

As always, thanks to Steve Birchall Poultry Services, Redthorn, Enzari and Atletico Sport for making it possible, hopefully I can get that podium next time.