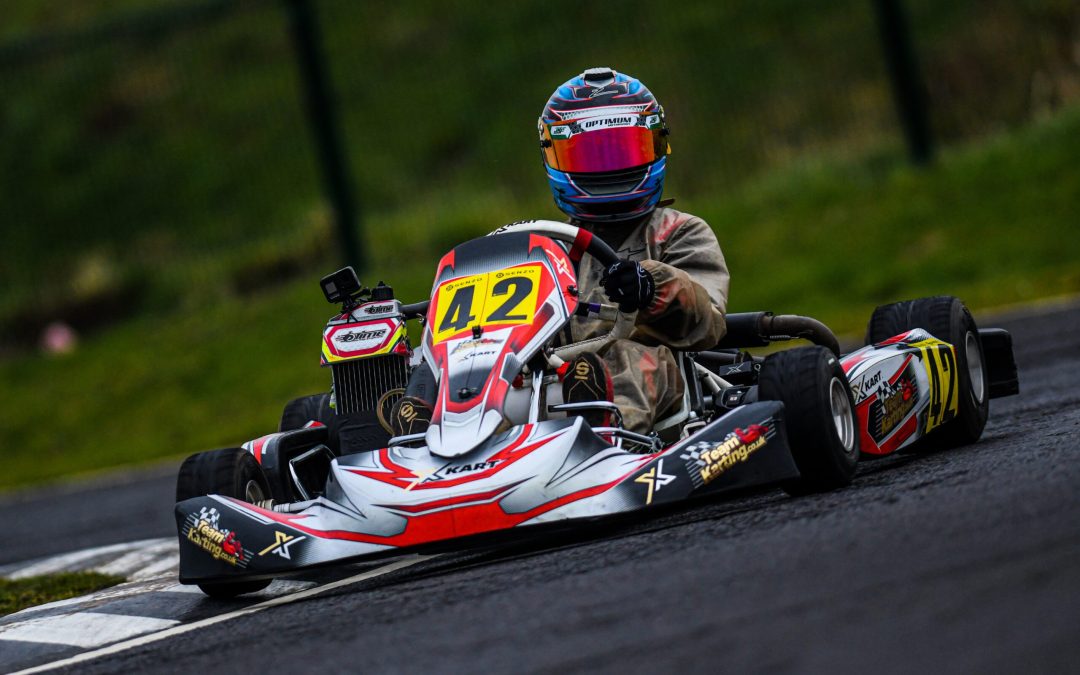 The first session was dry so we were on slicks. However, I had an issue with the kart so I had to come in early. Between the first and second sessions, it rained quite heavily so we were now all on wet weather tires. I had decent pace, being around 5th quickest. It then didn’t dry out until the 4th session but as the track was so cold, we stayed on wets. In the final two sessions, I was 3rd quickest so I was looking good for race day.

Starting 3rd I was hoping to finish in at least the top 5. At the start, the right side of the grid got a bad run so by the first corner I was already down in 4th place. Until the 4th lap was in 4th place but on lap 5 I got overtaken into the first hairpin. At the second hairpin, the driver behind me sent me up the inside and hung me out. By the end of the lap, I was already down in 6th place. On lap 5, another driver sent it up the inside of the second hairpin, putting me down to 7th place. Until the last lap, I was having to aggressively defend from the driver in 8th. On the final lap, they made a mistake, giving me a bit of breathing room for the checkered flag. I was classified in 6th due to penalties. In this race the kart felt really nervous on the rear end, meaning I couldn’t trust the kart into and through the corners.

Starting 9th I knew that I had to gain at least a few places and hopefully finish in the top 6. At the start, the pole-sitter slowed down and fell down to last. Going into the chicane, another driver ahead locked up and spun into the corner. Going onto the 2nd lap I was in 7th place. Up until the 3rd lap I was in a pack of 5 karts and I was in the middle. On lap 4 the driver behind went up the inside of the second hairpin and squeezed past, putting me back down into 8th place. Going into the 9th lap, I had just caught back up after falling back a little. Into the first hairpin, the driver in 7th sent it up the inside of the driver in 6th, this allowed me to get alongside 7th and, by the second chicane, ahead of them and up into 7th. This is where I stayed until the end of the race and there were no penalties. This race the kart felt a lot better yet I just couldn’t use it.

Once again in this heat, I was starting in 9th and was just hoping to finish better than the last heat. On the first lap, the race leader spun into the second chicane, moving me up a place. On the second lap, I got past the driver ahead of me into the first chicane and up into p7. Until lap 7 I was right on the bumper but couldn’t get past the driver ahead of me. but on this lap, I got a good run out of the last corner and past into turn 1. For the remaining laps, I was too far back from the pack in front of me so I finished the race in 6th. Yet again there were no penalties after the race so I was classified where I crossed the finish line.

For the final, I was starting in 7th place and I knew that I could get a top 5 finish. Into the second chicane, I managed to get alongside the kart in front and was past by time we got to the apex. By the end of the first lap, I was already in 6th and was nearly a second ahead of the driver behind. Until lap 4, I was right on the back of the pack in front of me but I couldn’t find anywhere to get past. At the second hairpin, the driver in 4th went for a move on the driver in 3rd. He then got a bad exit which allowed me to get past by the time we were at the next section of corners. However, midway through that section, the driver that I had just overtaken stuck his front bumper into a gap. I then didn’t see him which caused us to collide and both spin. By the end of that lap, I was down in 8th and had lost nearly 6 full seconds to the rest of the pack.

It was now push time as I had to close a 4-second gap to the next kart. Over the next 8 laps, I was catching the kart in front by about 8 tenths a lap. By lap 12 I was right on her bumper and ready to get past. Into turn 1 on lap 13, I attempted to get alongside and past but I couldn’t make the move stick. Instead, I sent it up the inside of the first hairpin, and this time I made the move stick and got up into 7th place, where I started. I carried on pushing and pushing but I eventually ran out of laps to gain any more places.

I was quite disappointed with this finishing result as two of the drivers that I was in a pack with finished on the podium. But as always, onto the next one…