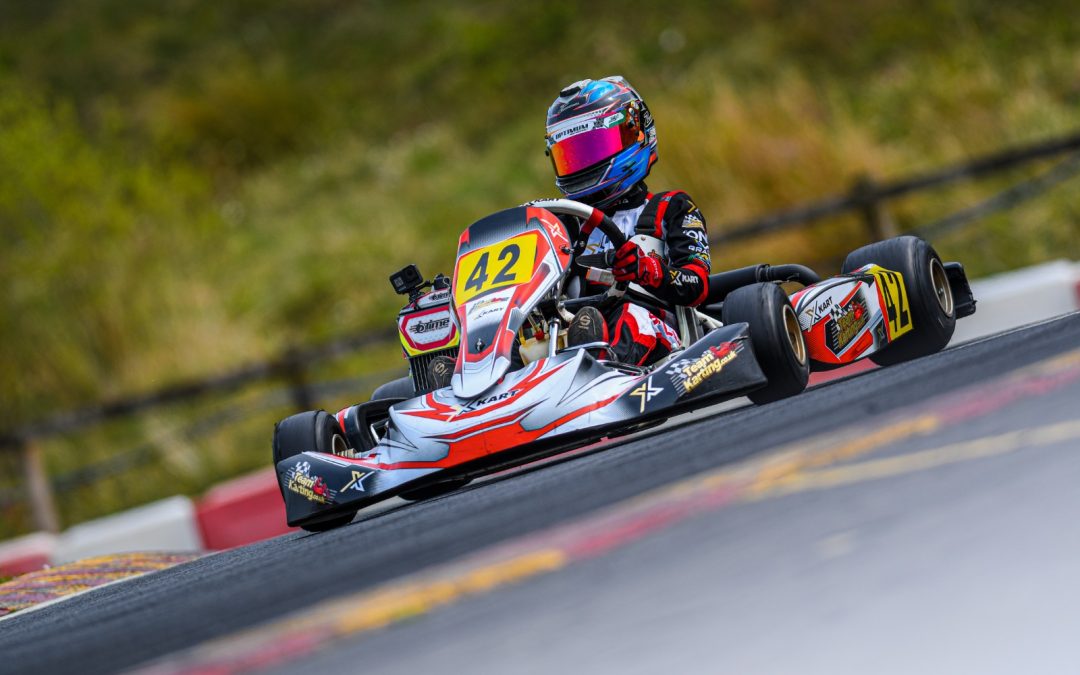 Going into this weekend the driver that had won both rounds so far had never been to this track before. So I knew that if I learned quicker than him and had good pace, I could hopefully beat him. Friday was very sunny, so the track was dry, and so was the morning of Saturday. On the afternoon of Saturday, it was due to rain and wasn’t due to stop all the way to 10 am on Sunday. So it was going to be interesting.

In the first session of the weekend, I was about 3 tenths off of the pace with a 49.87. In the second session, I went out behind the driver which was the quickest in the first session so I got a 49.62. This lap was less than a tenth slower than the quickest driver. In the third session, I was on my own, and about 2 laps into it I started to have electrical issues where the engine would cut out completely out of a corner before coming back on until the next corner. We were having these issues for the remainder of the day so I ended the Friday over 7 tenths off the pace.

On Saturday, we fixed the issues and started again from the previous day. In the first session, I was one of the quickest on track. This trend continued until session 3, with 3 to go. In session 4 the rain started to fall but it was only enough to slow the track down by a few tenths. Between sessions 4, 5, and 6 the rain continued to fall. In session 5 the track was 8 tenths down but we were still on slicks. In the final session, the track didn’t look wet enough for wets so I along with the majority of the drivers stayed on slicks. The track was over 3 seconds down and the wet runners were about 1.5 seconds quicker than me. As I said before, this rain didn’t stop until 10 am on race day.

Race day was very wet and foggy so track conditions were very slippy.

I was starting in p6 for the first heat, so I was hoping to finish in the top 5. Into turn 1, the second-place starter went straight on, through the cut-through of the chicane. I also went up the inside of the kart that started alongside me so I was up into p5. In the first hairpin, the driver that went straight on spun which caused a small pile up and moved me up into p3.

Up until lap 4, I was comfortably in p3, however, I made a few small mistakes which allowed the three drivers behind to catch back up. In the second hairpin, I got sent up the inside but I switched them back and got back into 3rd. Through the next corner, they sent me up the inside again but I switched them back again and got back up into 3rd for the 2nd time. Going down the hill they got a better run a got past in the next corner.

At the second hairpin on the next lap, I got sent up the inside and fell down to 5th. Because of this, I got a really bad run out of the corner which let the next driver behind catch up and overtake me, making sure to block me off to stop the switchback. 3rd to 6th in 2 laps. After penalties I was classified in 5th.

In heat 2 I was starting 10th, so was hoping for a top 6. In the first chicane, I held my position in 9th place. Going into the first hairpin, the driver in front went defensive so I went to the outside. This initially worked until I had to back out on the exit because I was left no room. In the next corner, I sent it up the inside and finally got the overtake. One corner later the race leader missed their braking point and got stuck in the bark trap. This gained me another place. By the end of the lap, I was up in 8th.

On the next lap, the new race leader had a mechanical issue which gained me another place. During lap 3, I got sent into the second chicane, moving me back down to 8th. Later on, in that same lap, I got a good exit and overtook a different driver so I was back up into p7.

On lap 5 I was right on the rear bumper of the driver in p6, almost pushing him through the first chicane. On the run down to St. Johns (turn 10), I managed to pull alongside and get past. In the final corner, I ran a bit wide, which allowed him to get a better exit and pull back past me into turn 1. During lap 7, in turn, 6, he slightly missed his braking point and aquaplaned straight off the track. I was now in p6 but the battenburg, quarter-flags were out so I couldn’t gain any more places. After 2 drivers were disqualified in front of me I was classified in p4.

On lap 5, I sent it up the inside of the driver in front through the second hairpin, however, I ran deep which allowed them to get a better exit and back past down the straight. Into the first hairpin on the next lap, I forced the kart in front narrow to attempt to get to their outside. Under braking, they slightly moved into my line, and because it is wet, we both spun. I fell down to 15th but immediately got back into 14th on the next corner. This is where I finished as I was too far back from the next kart. After penalties, I was classified as 13th.

Before the final, the track had started to dry rapidly so it was about 2 seconds quicker and a lot more grippy.

I was starting the final in 7th because of my p13 finish so I wanted to finish in the top 5. I had a bad start so the drivers in p8 and p9 got straight past me into turn 1. Into the hairpin, I took a wider line in order to get a good exit, this then opened the door for the kart behind, and without a second thought, they went past. I was down to p10 after 4 corners. At turn 6 on the same lap, a kart that was fighting for p3 got spun around, this gained me another place so I was back into p9. Into the final corner, the driver behind sent it up the inside, moving me back down to p10. Quite a disappointing start but I knew that if I found the pace, I could get the places back.

On lap 2, another driver fighting for p3 span it and got stuck in the bark trap. This promoted me up into p9 yet again. I held position here until lap 6. I just couldn’t find the pace as I didn’t know where I was slow. During lap 7, I got sent up the inside by a chasing kart behind at turn 4. On the next lap, the kart in 11th copied the move and demoted be down to p11.

Over the next few laps, I slowly started to fall back from the kart in front and by lap 11, the kart in 12th was right behind me. They sent it up the inside at turn 6 and I was down to p12. This is when I started to follow them and pick up the pace. Unfortunately for me, I had run out of laps and before I knew it, it was the checkered flag.

After penalties (and a lot of luck) I was classified in p8. I was really disappointed with this performance as I was expecting to be quite strong this weekend.