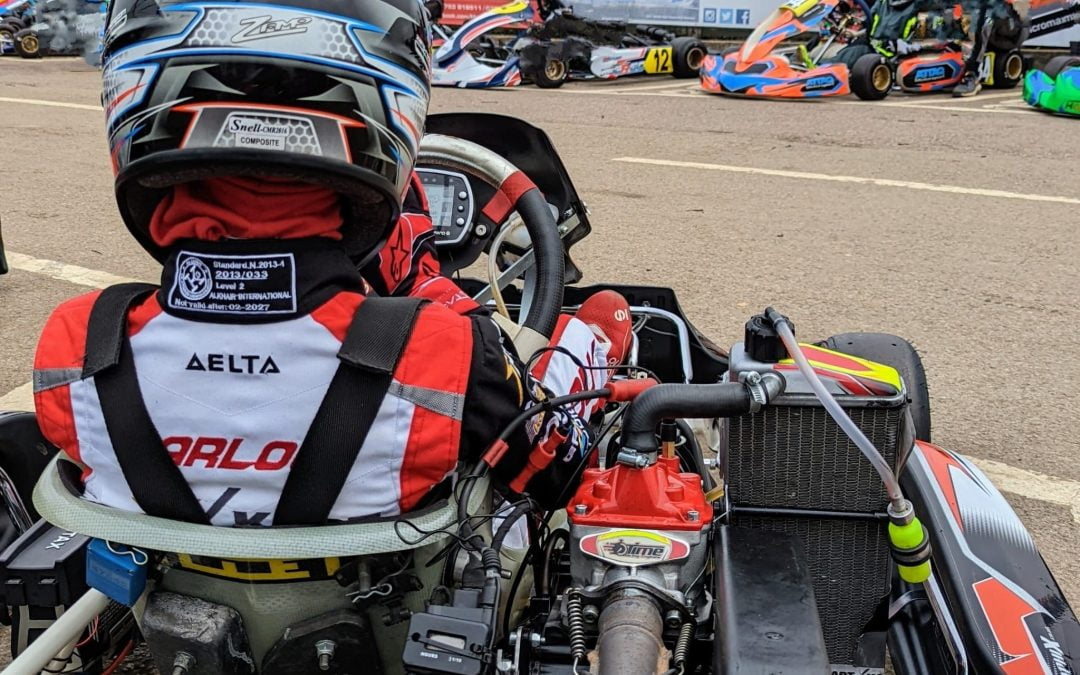 In the first session, I got a high 48, which, even though was slow compared to a WMKC lap time, was the second quickest lap of the session. This trend of me being second quickest continued until session 4 when (believe it or not) it snowed just before we were due to go out! Obviously, we weren’t allowed out due to a safety concern so there was a 30min break to let it melt. When we got going again it was full wet conditions and I was quickest on track with a 1:03.3. On the next session, I was back on slicks but the track now had no rubber down so I could only get a high 49.

At the start, the entire right-hand side of the grid got a bad start, so by turn 1, I was already in 4th from 7th place and was ready to gain places. My progress was stopped later on in the lap with a full course yellow because of a stranded kart. Luckily for me, it was only out for one lap so I could hopefully gain a couple of places.

The gap was staying at 1.2 seconds until lap 6 when the driver ahead made a little mistake. Over the next two laps, I was gaining at 3 tenths per lap. On the second to last lap, I dipped a wheel onto the grass into Christmas corner which lost me a bit of time. As the final lap came, the gap was down to under 2 tenths. It was obvious that the driver ahead was getting nervous as the made a few mistakes which allowed me to close the gap significantly. Into the boot for the final time, I sent them narrow, tightening up their corner. I then pulled to the outside to switch them back. It was a 50/50 chance whether they would cover me off on the inside and they did. I finished 3rd and there were no penalties ahead.

At turn 8, on lap 5 the driver in 3rd half-spun onto the kerb, slowing them down. As I tried to get past they turned in front of me, causing my rear wheel to hit their front wheel and sending me into the air. When I landed the camber of the front left wheel moved, this made the kart handle badly for the remaining of the race. Into Christmas corner, on the next lap, the driver behind sent it up the inside which moved me down to 7th. On lap 7, the driver in 3rd had a mechanical failure, moving me up to 6th. This is where I finished on track, but after penalties, I was classified in 5th.

In the third heat, I was starting 5th so I expected to at least get a podium. Into Christmas corner on the first lap, I sent it around the outside of the driver ahead, moving me up into p4. On the second lap, I tried to go around the outside again but I couldn’t make it work. Into the boot, the driver behind went to my inside, getting past. He then divebombed the kart in front, t-boning them and causing them both to spin. I then had nowhere to go so I hit them in the side. My steering and throttle were stuck on so I then came back onto the track and got hit in the side. I was forced to retire, and I had greatly hurt my wrist.

https://youtube.com/clip/UgkxJ87pep2kU4DEET_2eflyseoDJAVSs33N (Crashing out of Heat 3)

With a 3rd, a 5th, and a retirement I was starting 8th for the final. I was unsure whether the chassis was bent or damaged so didn’t know how it would handle. It turned out that the kart would handle very badly. On left-hand corners, it had extreme oversteer and on right-hand corners, it had extreme understeer. Due to this, I spun on the first left corner of the track on the out-lap. Luckily I managed to catch back up and get back into position for the start. Rather embarrassingly, I spun the same way on the first lap at the same corner. I was now last. This showed how horrible the kart was to drive. Later in the lap, a driver ahead got a puncture which allowed me to get past. At the end of the first lap, I was way down in 16th and was 2.5 seconds behind the next driver. I was now on a big charge.

On lap 5, the gap to the next kart was 7.7 seconds. The gap wasn’t closing until lap 10 when I had closed it down to 6.6 seconds. With just 3 laps to go, however, I doubted that I could close it down. Over the next laps I was closing rapidly and going into turn 5 on the final lap, I was right on the bumper. With my spin at the start, I had picked up a drop nose so I knew that I would get a penalty. This is why I didn’t go for the move as, if I spun I could lose 12th. I crossed the line just 0.074 seconds behind the next kart and was classified in 12th place.

I was quite upset with this result as I knew that if I hadn’t have crashed in heat 3, I would have been in the challenge for the podium. However, looking on the bright side, it was great damage limitation from a bad situation.